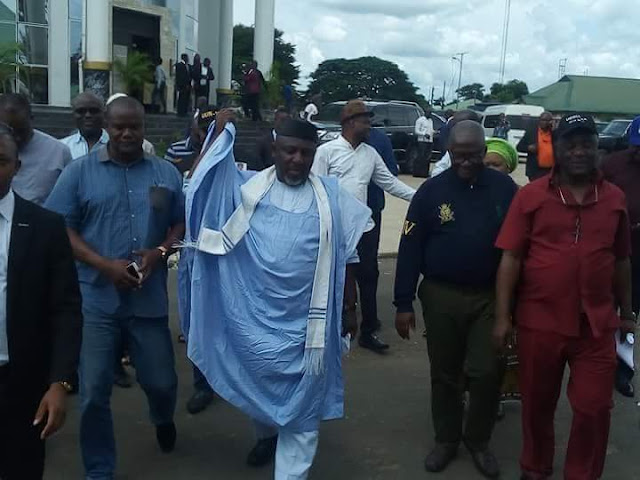 The Minister of Finance, Zainab Ahmed has announced that five Nigerian states would not receive the last tranche of Paris Club Refund.
She made this known during a briefing with State House Correspondents after the weekly Federal Executive Council (FEC) meeting at the Presidential Villa, Abuja.
The states which comprise of Benue, Rivers, Imo, Osun and Akwa Ibom, according to Ahmed, would not receive the fund until they meet all conditionality set by the Federal Government.
The refunds due to the states amount to $2.7 billion (N972 billion).
The Federal Government, last month, ordered the recall of Paris Club Refunds released to the affected five states.
The recall of the funds was done directly from the accounts of the states with the Central Bank of Nigeria (CBN).
Speaking yesterday, the Finance Minister explained that the Federal Government was presently working with the states to reconcile on their readiness to meet the conditions.
Ahmed said: “In respect of the Paris Club, Mr. President has given approval for the payment of the last Paris Club refund to the states, but the approval came with some conditions which we are trying to work out together with the states to meet.
“Those conditions that Mr. President gave is that we must show that the states have used the previous refund for payment of salaries and they will use this one also for payment of salaries,” the minister stressed.
Controversies surrounding the refund
FEC had in September 2018 approved the release of N689 billion balance of the refund to states.
But this was vehemently opposed by workers, under the auspices of the Nigeria Labour Congress (NLC), who appealed to the federal government  to deny salary debtor states the release unless they commit to instant payment of all salary arrears and other outstanding emoluments.
State governors, however, continued to agitate for the release, saying it was needed to tie them over, particularly as they approach electioneering for the 2019 general elections.
Buhari, reportedly, met with the leadership of Labour, represented by NLC President Ayuba Wabba, and Governor Godwin Emefiele of the CBN, and agreed with them that the only states that were up to date would have the balance of their refund released to them.
However, states that still have salary backlog could only get the fund if they sign ironclad guarantees that the release would be used to clear the arrears of salaries and outstanding emoluments of workers.
Earlier in September, the Federal Ministry of Finance had blacklisted salary debtors, state, insisting they could step forward for their balance if they cleared arrears of salary and commence the repayment of Budget Support Loans granted them in 2016.
The other conditions it gave were, clearing amounts due to the Presidential Fertiliser Initiative as well as a commitment to clear matching grants from the Universal Basic Education Commission (UBEC), where some states have available funds, which could be used to improve primary education and learning outcomes.
The federal government had earlier released N766.54 billion in two tranches to the states. N522.74 was initially released in November 2016, followed by another N243 billion.
Buhari had based the release on the condition that a minimum of 75 percent of the fund would be applied to the payment of workers’ salaries and pensions by states that owed workers.