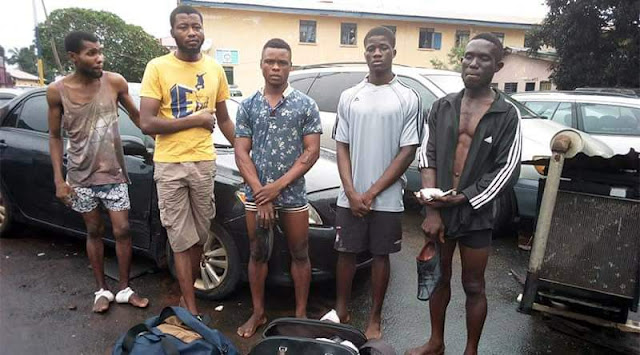 Operatives of the Federal Special Anti-Robbery Squad of the Imo State Police Command have arrested the suspected killers of Rev. Fr. Jude Egbom of St Patrick ’ s Catholic Church , Amucha, in the Njaba Local Government Area of the state .

Egbom was shot dead on Monday on Nkwerre-Anara Road , while his vehicle was stolen.

The state Commissioner of Police , Dasuki Galadanchi, said the suspects – Chigozie Uzoukwu, 33 ; and Peter Ochokwu, 21 – were nabbed in Nkwerre on September 11 .

The CP, who decried the killing of the cleric , noted that the victim’s vehicle and travelling bag had been recovered .

The police boss explained that one of the suspects , Ochokwu , an ex-convict , had spent one year in the Owerri Prison for alleged involvement in an armed robbery case.

The CP said, “ On September 11 at Owerri Nkwoji , in the Nkwerre LGA, Imo State, F -SARS operatives , led by CSP Godfrey Victor, acting on a tip-off arrested two suspects in connection with the murder of Rev. Fr. Jude Egbom.

“ A black Toyota Corolla, with number plate , FKJ 984 EV, belonging to the hoodlums who robbed and murdered the cleric was recovered .

“ Some of the property in the suspect’ s car were found with the one of the suspects in his house . ”

Galadanchi disclosed that one Raphael , the operator of the barber ’s where the priest had gone to shave before he was murdered , had also been arrested for questioning .

He noted that other members of the gang – Kelechi Nnajiuba, 24 ; Ifeanyi Chukwukere , 28 ; and Ekene Ohaeri ,27 – were in police custody for the kidnapping of a worker with the National Population Commission.

He said the suspects collected N5m ransom, shot the victim’ s police orderly and collected his AK-47 rifle which they had been using to terrorise people in the state .

The CP added that the police were on the trail of two leaders of the gang.

According to Galadanchi, a pair of shoes, two vehicles , a travelling bag belonging to the slain priest and 46 pieces of Permanent Voter Cards were recovered as exhibits from the house of one of the two suspects .