Menu
Home » News » OKOROROCHA IS A CERTIFIED FAILURE , AN ACCIDENT IN THE GOVERNANCE OF IMO STATE -- Ohakim

OKOROROCHA IS A CERTIFIED FAILURE , AN ACCIDENT IN THE GOVERNANCE OF IMO STATE -- Ohakim 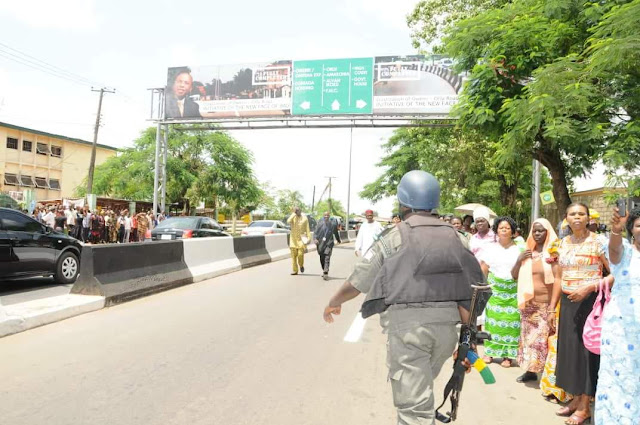 On Thursday, September 20, 2018, the Rochas Okorocha government embarrassed the good, patient and hard working people of Imo State again when he informed them that Vice President Yemi Osinbajo will be in the state for a 2-day working visit, from Saturday September 22 and Sunday September 23, 2018.

Ordinarily such visit should elicit enthusiasm from the people, but that is not the case. Imo people rather feel embarrassed that despite the claims of the Okorocha led government that it has surpassed the achievements of all his predecessors from the time of the revered Sam Mbakwe to Ikedi Ohakim, despite that the government had not commissioned any project since its inception, the first time it invited the number 2 citizen of the country to the state is just to embarrass him and the people of the state with no tangible projects to commission but halls.

According to the government, the Vice President will he in Owerri to "commission some projects while on the august visit, including the Nigeria Airforce Hospital, City Primary School located at the former Fire Service Station, the New Nigeria Union of Journalists ultra-modern secretariat, the Nigeria Labour Congress House, the Christian Association of Nigeria (CAN) Headquarters, and the Imo International Exhibition Centre".

From the information available, the main reason the Vice President was invited to Imo State was to attend the jamboree of the Governor's birthday on Saturday. While we are not averse to the Vice President visiting the state for any reason, Imo people believe that reasons for such visit should be clearly stated.

Imo people hope that the main reason for the visit is not to characteristically unveil another statue.

His Excellency Dr. Ikedi Ohakim feels very sad that Okorocha after 7 years in office still has nothing to show. But this confirms what he has always told Imo people, that Okorocha is a certified failure and that he is an accident in the governance of the state.

Ohakim recalls that in 2016 and 2017 the state government took pages of the newspapers to advertise their so-called achievements in response to his private letters to Okorocha, wasting over N26M. It is shocking, therefore, that when the chips are down, when the Vice President was eventually invited to the state, there is nothing on ground for him to commission.

Ohakim also recalls that while he was Governor, then Vice President Goodluck Ebele Jonathan visited the state, not to dance and wine on his birthday but to commission impactful projects. For example, Vice President Jonathan commissioned the Imo Roads Maintenance Agency (IROMA) with over N12bn worth of assets. He also commissioned the Imo Municipal Transport Service (IMTS), amongst others. When he became President he returned to the state for a 2-day working visit on 15 and 16 October, 2010, and commissioned: the new Governor's Office, dualized Orlu Road, Egbeada Water Scheme, Afor Umuaka-Amazano-Nkulu Road, amongst others.

The monumental failure which the Okorocha government has been is the reason Imo State has been a theater of the absurd. This markedly unprecedented failure that has unleashed pain on the people is the reason Imo people insist on bringing Ikedi Ohakim back in 2019.

While we welcome the Vice President to our state, Imo people would like him to use the occasion of his visit to feel the purse of the people and note that Okorocha has not lifted an ounce of the problems of the people of the state but instead, like a man at war with his people, Okorocha has destroyed everything there is in the state and left the people in penury.