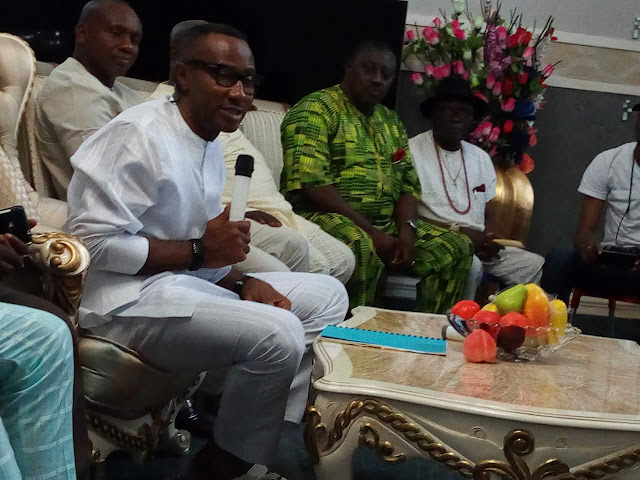 I am not a plan B of anybody. I am qualified to run for the office of governor having moved file from one table to the other where we are thought not to be heard since 1986.
I grew up in the barracks as my father was a soldier.
I am not running a competitive campaign. I won't demarket anybody bcos i am running for governor. We will concentrate our campaign by marketing our brand and allow the people to choose me based on my antecedent and qualifications.
Our Slogan is REFRESH IMO; it is so bcos we know that the state is suffocating and needs a fresh air.
Imo State is in abject disorder . Rule of law must be obayed.......due process playing in every sector.
We will consolidate in some areas like the FREE EDUCATION, but making it a qualitative one. We can't keep producing graduates who can't stand out as graduates.
We will improve in our man power, train and retrain workers. The idea of cutting down civil servants  salaries or even owing them is a bad one.
We will make institutions work again. Our water board will come back to live. The ministry of works will take up it's functions. I want to see sign boards on construction sits showing the company handling it and her clients. Roads must be built for people who are alive, not for those who the roads will kill.  We will build new roads, but first of all maintain the existing ones.
We must create jobs by creating an enabling environment for private sectors to strive.
We need a serious rehabilitation of the market women and traders. Most of them are unhappy, displaced and are starving to death.
I will like to see a govt that will work well with the church than the one that will employ a CPS that will engage in a battle of insults with the clergy men
If there is anybody to talk about the pensioners,  i am the one. Their case is the most sorry. It's painful to have our old ones suffer after serving out their youthful  strength.
Our hospitals are bad and mere empty buildings. More painfully  is that they are badly located that is almost not very accessible to the aged.
We must go e-govt. Our land system is messed up......... fake documents everywhere, that sometimes you don't even know which is real.