IPOB sit-at-home succeeds in Onitsha, Aba, partial in Imo, fails in Ebonyi, Enugu, and others 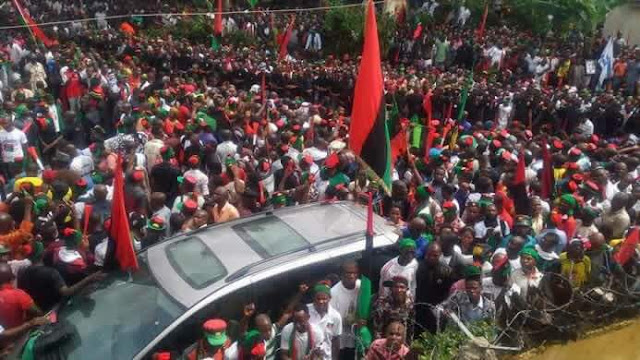 The sit-at-home called by the Indigenous People of Biafra (IPOB) failed in Ebonyi State, Premium Times can authoritatively report.

The group called for the measure to commemorate and protest the invasion of the country home of its leader, Nnamdi Kanu, one year ago on Friday.

Since that invasion by Nigerian soldiers during their Operation Python Dance 2, Mr Kanu and his parents have not been seen.

The new Commissioner of Police in the Ebonyi State, Musa Kimo, had urged residents to go about their normal businesses. He also held a series of meetings with businesses where he assured them of adequate security.

It was business as usual in the state capital, Abakaliki, on Friday as residents went about their normal daily business activities.

Shops, motor parks, banks and other major businesses remained open in the city from 8 a.m. in disobedience of the order by the pro- Biafran group.

The Abakpa main market, the mechanic village and other markets in the city were open as traders ran their business.

However, transporters had no buses going to Onitsha or Aba in Anambra and Abia states respectively.

Joint security teams patrolled the streets of the city with some others on standby at strategic points.

A resident, who spoke to our reporter, Geoffrey Igboke, said he did not observe the exercise because he did not see the need for it.

The sit at home order was also a total failure in Enugu.

Business and social activities were in top gear. All offices and banks were open for business.

Streets of Abakpa-Nike, Enugu metropolis were beehive of activities with commercial and private vehicles heading to different destinations.

Petty traders and hawkers also took their strategic positions on the the streets to sell their wares, while newspaper vending stalls were crowded with young men who made arguments over the compliance with the IPOB directive.

Mass transit parks were equally busy loading passengers to different destinations such as Nsukka and Abakaliki. In the hinterlands such as in Ugwogo community, the usual village settings remained even as police check points were also maintained along Ugwogo-Nsukka road.

Some shops were however closed in Enugu metropolis but banks were opened attending to customers. Meanwhile, soldiers were seen at alert as they mounted fresh road blocks in exercise of Operation Python Dance 3.

A generator repairer at the New Layout, Enugu who simply gave his name as Okwudili ‎said “why I will not obey the order is that I have my children to feed and IPOB will not place any food on my table. ”

In Onitsha, it was total shutdown as usual in the commercial city as banks, schools, motor parks, filling stations and other businesses were shutdown.

The popular, Onitsha Main Market, River Niger bridge (both Onitsha and Asaba ends) and other markets in the city were also shutdown.

Popular roads like Awka Road and Upper Iweka Road were on total lock down as there were no means of transportation to serve the few prospective passengers.

A filling station operator, Johnson Okpala, who spoke to PREMIUM TIMES on phone said filling stations may open in the evening to enable transporters take people home for the weekend.

But PREMIUM TIMES learnt that most people stayed at home for fear of the unknown.

However, the situation was partially different in Awka and Nnewi from what obtained in Onitsha.

In Awka, banks were shut, and customers resorted to Automated Teller Machine services; so were some schools, mainly because of the fear of the unknown.

The state secretariat also witnessed skeletal service as many workers abstained from work. Those of them who went to work did so well after 9 a.m. when they were sure of their safety.

Along the streets, however, businesses and shops were opened.

There was similar experience in Nnewi, the state’s industrial hob. The main Nkwo Nnewi market was open but majority of shop owners stayed away.

Also, some banks opened their branches for business with their security personnel keeping watch on the environment.

There has been no incident as at the time of publishing this report.

In Abia State, it was partial complaince in Umuahia, the state capital, while the commercial city of Aba recorded total compliance.

While markets and banks were opened in Umuahia, PREMIUM TIMES learnt that schools remained shut as school children stayed at home playing.

But in Aba, there was a total shutdown of commercial activities in the city, a main stronghold of IPOB.

The popular Ariaria Main Market and other markets were on shutdown with only security officers seen around the area to ensure that hoodlums did not capitalise on the situation to loot shops.

Even tricycle operators who were in operation in other cities monitored also joined in the sit-at-home in Aba.

They were seen discussing in groups at some of their parking terminals instead of going out to look for passengers.

The city looked like a ghost of its self.

In Owerri, the Imo state capital, there was partial compliance as most people stayed away from the markets and shops in the morning.

Banks opened but had few customers to attend to up until 12 p.m. when people noticed that others who opened for business were not attacked or molested by IPOB members.

This forced them to leave their houses and open their businesses.

Security was tight in the city especially around government offices and banks.

Some of the schools opened while others remained shut.

There was low turn out of students in the schools that opened as parents kept their children at home for fear of the unknown.

At the time of filing the report, commercial activities have started picking up in the city.