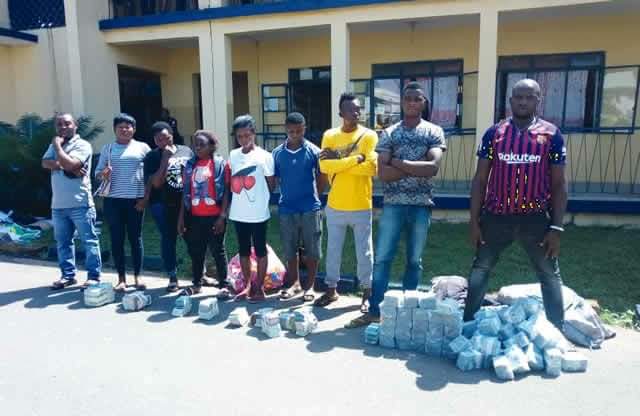 The Imo State Police Command on Friday arraigned 10 persons before a magistrate ’ s court in Owerri on a charge of hawking and selling naira notes .

Parading the suspects before the arraignment , the state ’s Commissioner of Police , Dasuki Galadanchi , said that the suspects were arrested in Owerri on September 13 during a joint operation by the police , Department of State Services and the Central Bank of Nigeria .

Galadanchi disclosed that N 5, 565 ,670 ,00 of various denominations was recovered from the suspects .

The police boss said that the arrest and arraignment were in conformity with CBN Act , Section 20 and 21 , which he said made it a punishable offence for anybody to hawk, sell or otherwise trade in the naira notes , coins or any other note issued by the bank .

He said , “On September 13 , Imo State Police Command and the Department of the Security Services in collaboration with Central Bank of Nigeria carried out a sting operation , aimed at forestalling illicit sale of the country ’s currency notes , the naira .

“Ten suspects comprising men and women were arrested along Douglas Road , Owerri during a raid supervised by the commissioner of police .

“The police , DSS and the CBN will continue this clampdown on the perpetrators of this offence which is punishable under the CBN Act 2007, stipulating a jail term not less than six months or to a fine not less than N 50 ,000 or both.

“For the avoidance of doubt , acts of spraying naira notes at events , soiling , writing on them , squeezing them as well as hawking and selling of the country ’s currency notes are abuse of the naira and are punishable under the law .”