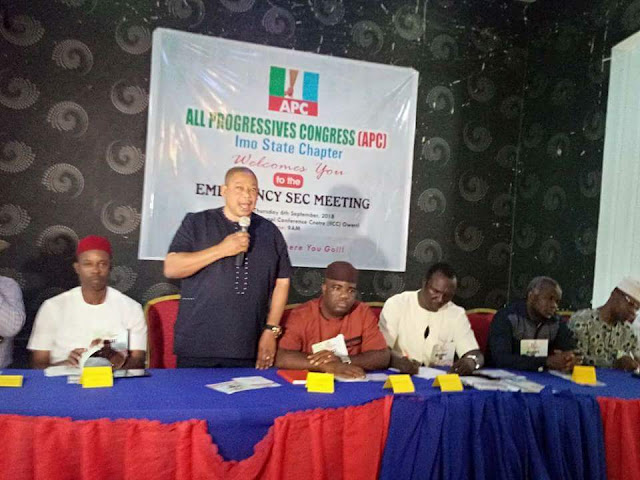 The 6th State Executive Committee meeting of the governing All Progressives Congress in Imo State has voted unanimously to adopt the indirect method of nominating Party candidates for various elective positions in the State.

At a well attended meeting of all members of the State Executive Committee which took place at the Imo International Convention Center, Owerri, the State Chairman of the Party, Daniel Madueke Nwafor informed SEC members and other critical stakeholders of the Party who were in attendance that the Party's Constitution allows for either direct or indirect primaries in nominating candidates, explaining that the State Executive Committee, as the highest decision making body of the Party at State level has the mandate to choose which method to adopt.

Barrister Jude Uzoukwu, the Chairman of the Party in Nwangele LGA of the State moved a motion for the indirect method to be adopted considering the security and peculiar logistics challenges that may come with the direct method. His motion was seconded by Hon. Obinna Egu, the deputy chief whip of the Imo State House of Assembly. There was no contrary motion from all SEC members present.

The Chairman was therefore given an unanimous mandate by SEC members on behalf of all the members of the Party in the State to communicate the National Working Committee of our great Party on this decision.