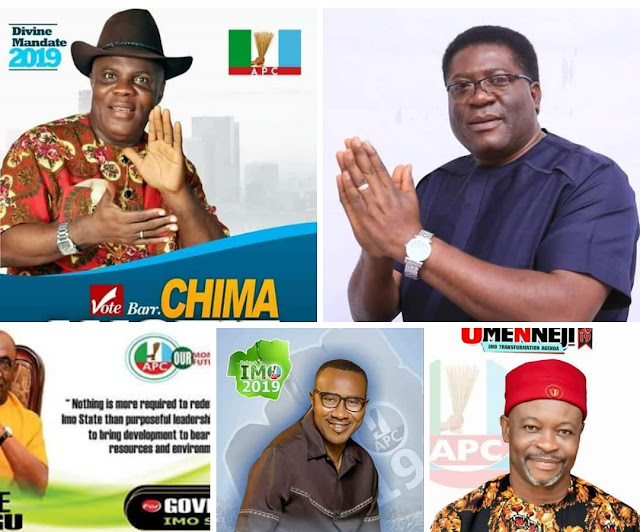 Last minute move made by the APC governorship aspirants from the Owerri zone extraction of Imo State to have a consensus aspirant that would challenge governor Rochas Okorocha’s preferred choice , Uche Nwosu, during the primary on Monday , has failed .

It was gathered that the aspirants, consisting of the deputy governor of the state , Eze Madumere ; immediate past Secretary to the State Government , George Eche ; Okorocha’s brother -in -law , Chuks Ololo ; the governor ’s former appointee , Chima Anozie ; a former SSG , Jude Ejiogu ; businessman , Chris Nlemoha ; and a retired air commodore , Peter Gbujue , met in Owerri , the state capital , on Saturday to reach an agreement of a consensus amongst themselves.

A source at the meeting , which lasted for about seven hours, told one of our correspondents that none of the seven aspirants from the zone agreed to step down for another .

The meeting , our correspondent learnt, was called by the leaders of the APC in Owerri zone to ensure the aspirants reach an agreement that would made them to support one among them for the Monday ’s exercise .

It was learnt that the people , who called the meeting , stated that Owerri zone would put the wrong foot forward going into the primary with seven aspirants while the other two – Nwosu and Senator Hope Uzodinma – are from Orlu zone.

All efforts made by the conveners of the meeting to persuade the aspirants to reach a consensus failed as all the aspirants preferred to head to the primary .

Confirming the development to Sunday Punch , the director of media of one of the aspirants ( Nlemoha ) , Callistus Emeruo , said his principal was going ahead with the primary .

“The aspirants at the meeting said that the meeting was rather coming too late. Tomorrow is the primary and it is wrong asking an aspirant who has traversed the whole state in campaigns to step down.”
Ikenna Onuoha, a media aide to another governorship aspirant , Ejiogu , said his boss did not step down for anybody .

Onuoha added , “Jude Ejiogu did not step down for anybody . If there is any aspirant who should be a beneficiary of the consensus aspirant option , it is Jude Ejiogu . He is the most qualified. He has the capacity and contacts to make a good governor .”

Investigation by SUNDAY PUNCH
revealed that Madumere , Nwosu and Nlemoha are the aspirants to beat in the primary .

Speaking to Sunday PUNCH ahead of the primary , the deputy governor said that he was prepared for the exercise .

Madumere , who sued for a free and fair process , said his campaign organisation rejected the plot by some members working for the state government to hijack the process at the grass roots .

The governorship aspirant , who spoke through his Chief Press Secretary , Uche Onwuchekwa , said only accredited INEC collation centers at the wards should be used for the primary .

Also , Nwosu said , “ I am ready and prepared for the primary . My campaign organisation and supporters across the state are ready . It is a popularity test election and Uche Nwosu is ready .”

This is the first time in the democratic history of Imo State that aspirants from Owerri zone will harmonise and project a common front of just one aspirant."