Menu
Home » Politics » Ihedioha , Anyanwu agree to work together for the interest of PDP and Imo people

Ihedioha , Anyanwu agree to work together for the interest of PDP and Imo people 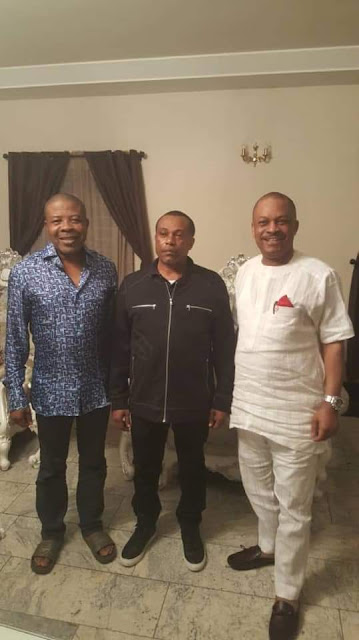 Ahead of governorship primary of the Peoples Democratic Party in Imo State , two political foes , eyeing the governorship ticket of the party , Emeka Ihedioha , and Senator Samuel Anyanwu have pledged their support for a peaceful outcome .

This is coming after a nine - hour closed -door meeting in Owerri , which was presided over by the state chairman of the party , Charles Ezekwem.

Ihedioha , who is the immediate past deputy speaker of the House of Representatives and Anyanwu , who is the Senate Committee Chairman on Ethics , Privileges and Public Petitions , have engaged themselves in volatile campaigns in the build up to the Sunday showdown .

Speaking to journalists after the meeting , where neither of the two agreed to step down for the other , Ezekwem described the outcome of the meeting as very fruitful .

He said that the peace meeting was brokered by Imo PDP Integrity Forum .

Ezekwem, who was flanked by Ihedioha and Anyanwu, alongside other party chieftains , said , “We have invited journalists to let the world know that the immediate past deputy speaker of the House of Representatives , Emeka Ihedioha , and Senator Samuel Anyanwu have agreed to bury their differences and work for the growth and success of our party after the primary election on September 30 .”

“We have mandated their social media aides , who have been insulting these great politicians , to desist from that nonsense or else they will have the party to contend with .

“I want to state without missing words that the duo of Ihedioha and Anyanwu are eminently qualified to be governor of the state . I will be happy to have any of them as the next governor of Imo State .

What is important is for PDP to reclaim Imo Government House in 2019 not these campaigns of calumny , bitterness and wickedness .”

Ihedioha told journalists that he had agreed to work with Anyanwu for the overall best interest of the party .

The former deputy speaker said , “I have agreed to work with my brother, Senator Samuel Anyanwu, in the best interest of our party and our state , Imo .

Anyanwu, who collaborated what Ihedioha said , maintained that the interest of the party must override personal expectations .