Menu
Home » Politics » 'I will win with APGA for the 2019 Imo Governorship Race' , Araraume Talks Tough

'I will win with APGA for the 2019 Imo Governorship Race' , Araraume Talks Tough 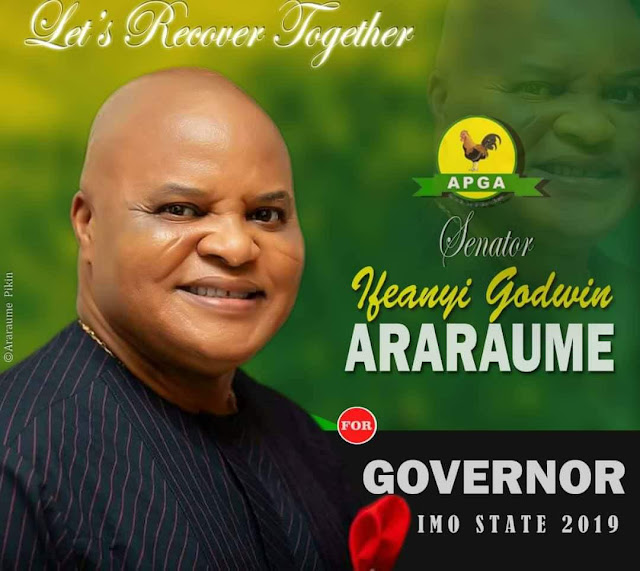 A governorship aspirant now under the All Progressives Grand Alliance, APGA, Senator Ifeanyi Ararume has given reasons why he left the All Progressives Congress, APC, to pitch tent with the party for the forthcoming election.
Speaking during his formal declaration at the party complex in Owerri, recently, the guber hopeful stated that, he strongly abhors injustice and would challenge it any day. “What I challenge everyday is injustice. It was one reason I left APC, because one man thinks he can pocket a party and the state,” he said.
Speaking about what fuelled his resolve to join APGA, Sen. Ararume maintained that, APGA remains a party that stands on justice, with a structure that is determined, strong and effective.
He added that, with his antecedent as the chairman of the defunct APP, he knows the workings of a party, as he announced his full membership of APGA.
Presenting his Nomination and Expression of Interest form, he informed that he is ready to contest for the governorship position, while he promised to abide by the Constitution of the party and work with party members as brothers and sisters, to ensure the party is strengthened in the South East.
He further promised to accept result of the primary elections and support whoever wins, provided it is conducted free, fair and without rancour.
Frowning at the state of governance in Imo, he urged Imolites to stand together, join hands and ensure a strong and efficient government that benefits all in the state.