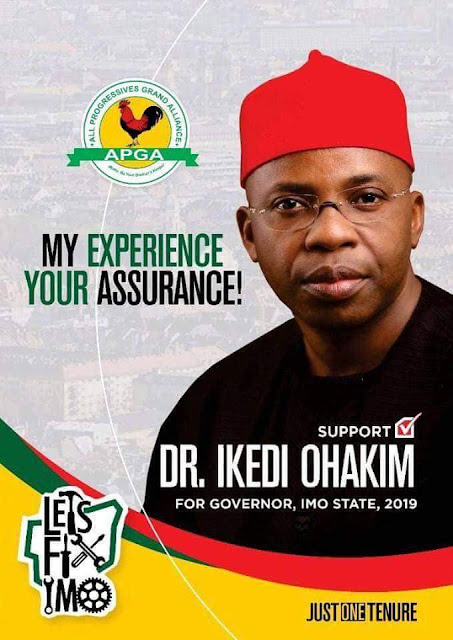 Ohakim disclosed this to press men on Saturday at the Odenigbo Lecture at the Assunpta Cathedral, Owerri, saying that though others might want to divide the Igbo people and rig them out in the general elections, Igbo people are wiser now and "know where the rain started to beat them".

He said that he came home to join APGA in order that the Igbo people might replicate what Zik, Jim Nwobodo and Sam Mbakwe did when they came up with the Nigeria Peoples Party (NPP) which  won elections in the entire Eastern Region, Plateau, and went ahead to form alliance at the center and produced the Deputy Senate President and Speaker of the House of Representatives.

He said: "I joined APGA so that Igbo people can come together and do what Zik, Jim Nwobodo and Sam Mbakwe did when they floated their own party called NPP and they were able to win elections in the whole of the Eastern Region.

Ohakim noted that during his tenure as the Governor of Imo State for four years he was instrumental to the setting up of the Southeast Council of Traditional Rulers which gave the Igbo people the opportunity to speak at the center with other top traditional rulers in the country, adding that his administration also ensured that the Ohaneze Ndigbo did not suffer.

According to him: "It was APGA as an institution that was used to remove a government that was performing in Imo State and God has told me that it is APGA that will be used to correct that mistake".

He called on the leadership and members of APGA to see the need to carry Okigwe Zone along by ensuring that the 2019 governorship ticket is given to Okigwe Zone to complete their tenure and afterwards hand over to Owerri Zone in 2023 under APGA.

Ohakim who had gone to court to swear to an affidavit of 35 items of what he would do when reelected further noted that though others who are running for the governorship of the state are qualified, there is no state to govern as Imo State is indebted to the tune of N350bn.

"This is not a normal period in Imo State. There is no state to govern. This is like the period during the Second War when Britain had to look for Churchill to prosecute the war for them. What we are coming to do in Imo is a Marshall Plan. You need a general to carry out the Marshall Plan for Imo.

"I am coming for as specialist, an experienced mechanic, because Imo State has knocked engine. Everything is broken down and no infrastructure is working in the state. Imo is in an Intensive Care Unit (ICU) and you don't need anyone doing housemanship but a Medical Consultant with standing years of experience.