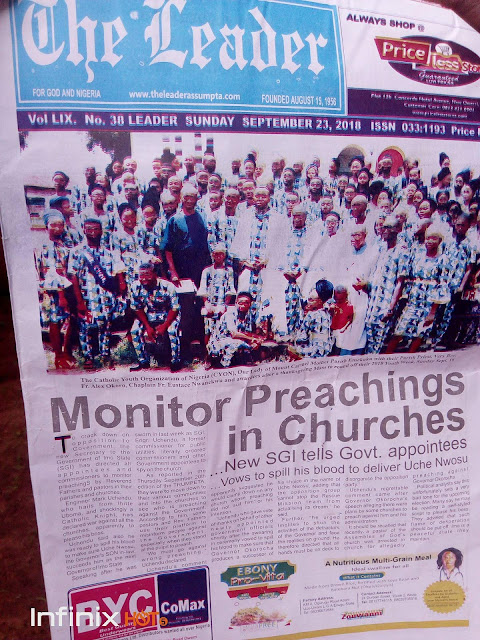 The Catholic Lawyers of Nigeria  under the umbrella body of National Association of Catholic LAWYERS of Nigeria has threatened to drag the secretary to Imo State Government Eng. Uchendu Mark to court if he fails to retract the directive /order credited to him as having directed all government appointees including Commissioners in the state to "monitor the preachings of Reverend Fathers and Pastors" in churches ostensibly to bring those that are critical of Governor Rochas Okorocha and his government to book.

The statement issued on Tuesday at the body's ongoing meeting in Lagos and signed by a famous lawyer and the Publicity Secretary, Mike Utsaha Esq read as follows :

PRESS STATEMENT ISSUED BY
THE NATIONAL ASSOCIATION OF CATHOLIC LAWYERS

RE: MONITORING PREACHINGS IN CHURCHES IN IMO STATE.

Our attention has been drawn to a news item in “The Leader News Online” September 23, 2018 edition, a publication of the Catholic Archdiocese of Owerri, South-East Nigeria, to the effect that the Secretary to the Government of Imo State Engr. Uchendu Mark, has directed all appointees of the Governor of Imo State, including Commissioners, “to monitor preaching by Reverend Fathers and Pastors in parishes and churches”.

The intention, according to the publication, is to “spy on Churches”, obviously to identify preachers who hold and may express opinions or canvass positions that are adverse to Governor Rochas Okorocha or the Government of Imo state.

Ordinarily, we are inclined to dismiss this media publication as mere beer parlour gossip and perhaps the figment of the Reporter’s imagination, but coming from a very well respected media outfit of the Catholic Archdiocese of Owerri, we have no choice but to believe the report. Indeed, we have since confirmed from ecclesiastical authorities in Imo State, that this offensive statement was uttered by Engr. Uchendu Mark.

It is rather unfortunate that a ranking official of a Government that was democratically put in place by the people of Imo State, will now turn around, for no just cause other than to ingratiate himself to his principal, to express a viewpoint that is completely at variance with democratic principles and capable of violating constitutionally guaranteed fundamental rights.

What is particularly worrisome is the fact Engr. Uchendu Mark is a Catholic and ought to be familiar with the sanctity and inviolability of sacred places. Obviously, his faith and Catholic identity can take a back seat as long as his position in government is guaranteed. It is only against the background of this conjecture that one may appreciate the statement credited to Engr. Uchendu Mark otherwise it is bewildering to say the least.

As Catholics, and as Ministers in the Temple of Justice; we find this totally unacceptable, and Engr. Uchendu Mark must be told in no uncertain terms.

Consequently, we demand an immediate withdrawal of this offensive statement, failing which we’d be left with no option but to utilise all legal and constitutional means to uphold the sanctity of the Church and the dignity of  those serving in the vineyard of the Lord. The 1999 Constitution guarantees the right to freedom of expression, it also protects the right to freedom of thought, conscience and religion and no one, no matter how highly or lowly placed, is permitted to engage in any conduct or utterances that are inimical to this constitutional imperative.