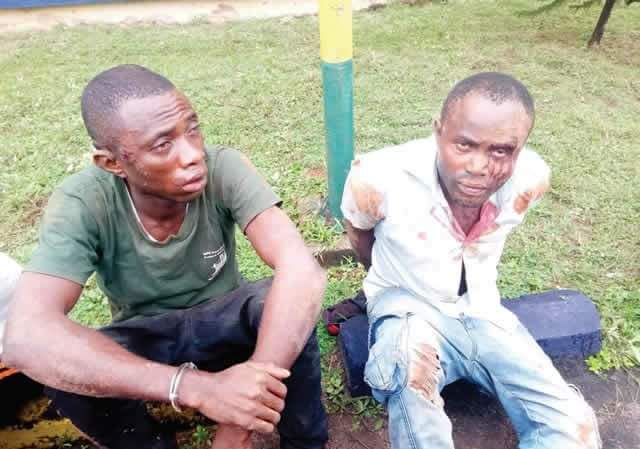 OPERATIVES of the Imo State Police Command have arrested two men , Chukwudi Chukwu and Bethel Ibe, for allegedly abducting a corpse from a morgue in the state.

It was gathered that after abducting the corpse , the suspects contacted the manager of the mortuary , Bright Nwanshi , and made a demand of N5m as ransom.

Parading the suspects on Thursday , the Commissioner of Police in the state , Dasuki Galadanchi, said police operatives swooped on the suspects , arrested them and recovered the corpse.
Galadanchi said the suspects kidnapped the female corpse from Jesus Hospital Mortuary in the Ikeduru Local Government Area of the state with the aim of forcefully collecting money from the management of the embalmment facility.

The police boss , who described the development as abominable, said his command , in line with the community policing strategies of the Inspector-General of Police , would continue to arrest law breakers.

“ I present to you Chukwudi Chukwu and Bethel Ibe. These men broke into a mortuary in the Ikeduru LGA and abducted a female corpse .

“ The suspects subsequently contacted the manager of Jesus Hospital Mortuary , Ikeduru Local Government Area and made a demand of N5 m for the release of the corpse.

“ We got wind of the crime and swooped on them. We arrested them in a forest and recovered the corpse ,” Galadanchi said , while disclosing that the suspects would be charged to the court at the end of investigation.

The manager of the morgue, Nwanshi , said , “They ( suspects ) broke into the mortuary and stole the corpse. One of the suspects is my former worker .

They asked me to give them N5m . I reported the matter to the police and investigation commenced .

“ On Thursday morning, the police arrested one of the suspects and the other one was arrested later. They took us to the forest where they kept it and we exhumed the corpse .”