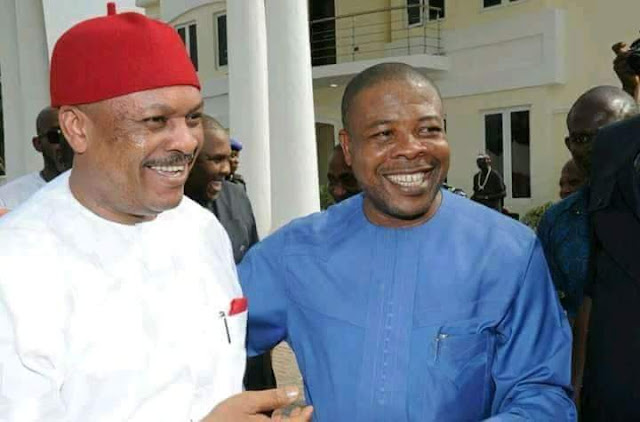 The PDP has remained the most prominent party in Imo state since the return to civil rule in 1999. Of the twenty years of civilian rule, PDP has had twelve of it. And it is always the most competitive in terms of governorship flagbearer elections.

In this 2019 dispensation, despite the fact that unlike in 2014 when all the hawks were up against one another, only two figures stand out as serious contenders. That is the veteran Emeka Ihedioha and the nascent Samuel Anyanwu. The profile gulf nothwithstanding, it has been no less intense with only about one week to go of the date for the guber primary.

I have, since 2014, formed the habit of making informed prediction of who would win the coveted Imo PDP ticket days ahead of the actual election. One important thing about my prediction regarding Imo PDP is that I disallow my personal sentiments in drawing my conclusion. This is because I allow objectivity and realism to be the deciders of my analyses and inferences.

First, let me give us a little background and sitrep.

With the eventual but very highly recommended and smart defection from PDP of Imo's last (as yet) PDP governor Ikedi Ohakim, the coast was seemingly clear for the powerful Emeka Ihedioha to have a walk-over. But all too soon, senator Samuel Anyanwu stepped up and provided a formidable force against Ihedioha.

Truth is that Samuel Anyanwu (popularly known as Sam Daddy) has saved Imo PDP from a boring one-man contest. Politics gets exciting when the contest is competitive.

Another bitter truth that must be told (and this is where I get to cross forbidden red lines much to the displeasure of pretenders and perhaps innocent uninformed) is that Samuel Anyanwu's candidacy has been built majorly on one foundation; that is the perceived shortfalls of influential Rt Hon. Emeka Ihedioha. The feeling is that Senator Anyanwu provides a good alternative to Ihedioha in some respects.

When you analyze Senator Anyanwu's campaigns, the most important keywords are "acceptable", "undivisive". If you have followed Imo politics long and well enough, you will understand why these words have been peddled in this instance.

Listen, in terms of actual influence, relevant experience and connections, Senator Samuel Anyanwu doesn't come any close to Ihedioha. They are indeed worlds apart. Yes he has grown steadily from state legislature to the Senate and he has had a good run so far. Samuel Anyanwu has been able to intelligently use his opportunity in the Senate to up his profile so much and attracted massive amount of goodwill and public appeal. He has been available, accessible (from day one) and constructively humble. These are marks of a good leader.

People who don't understand issues well enough use these indices to draw parallel to the personality of Emeka Ihedioha.

Emeka Ihedioha is not the type of person given to corn-eating in the market, keke-riding on the street; I mean those sort of mundane opportunistic dramas. Emeka Ihedioha works with structure. He puts people in positions and depends on them to be efficient enough to help him deliver desired results. So you may not get calls from Ihedioha. He tasks those he has positioned to do the necessaries and refer to him when his direct involvement is required.

Let me put it this way, Emeka Ihedioha is a delegator of power and duties. Efficient bureaucracy is his philosophy. This makes him a very good administrator. Above all, he is a broker of power and resources. He is boardroom smart!

All that notwithstanding, Senator Samuel Anyanwu has been preferred by so many party people at the state and national levels who don't like Ihedioha's mighty influence and his style. As we speak, Ihedioha no longer enjoys the near absolute control and loyalties of state party officials as it seemed before now. The idea of alternative figure has captured minds of so many in the state chapter of the party and some at the national level.

Now here it is: come this month, Imo PDP flagbearer for 2019 election will be Emeka Ihedioha!

Ihedioha remains much more influential and resourceful than Senator Anyanwu. He is much more capable in terms of fighting for power with the rejuvenated APGA and of course the power-drunk Rochas/APC. Ihedioha remains one of just few Rochas dreads like a horrible nightmare. This is because if he becomes Imo governor, he WILL, just like Ohakim would, strip Okorocha and his bandits of the things they have stolen from the State.

I will not deceive us about this: Ihedioha is not as generally appealing and likeable like a Sam Daddy, but he will be more effective.

Finally, don't be deluded, when and if Ihedioha wins the ticket no matter how cleanly that happens, a lot of people will look towards likes of APGA to pursue dream of getting rid of Okorocha in Imo. The hope is that APGA would produce a very good candidate like Ohakim.