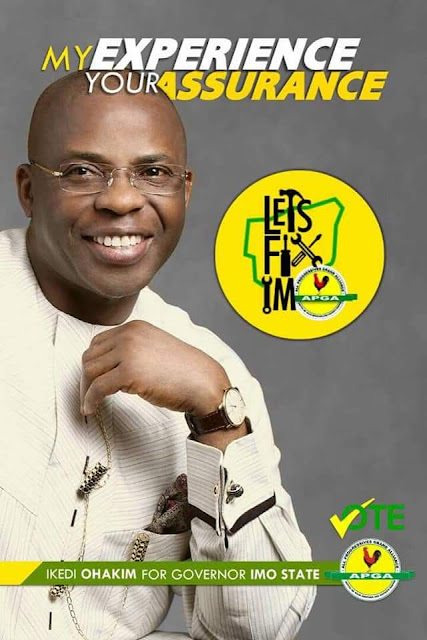 During a stakeholders meeting today in Owerri, His Excellency Dr. Ikedi Ohakim unveiled the core agenda of his administration, saying that he would focus on four point agenda when elected for second term in 2019.

Ohakim told the stakeholders drawn from the 27 local government areas of the state that his four point agenda is encapsulated in 4Rs, which are: Rehabilitation,  Reconstruction, Reconciliation and Recovery.

He said that his administration would embark on rehabilitation of the state and engage seasoned engineers to reconstruct the physical infrastructures of the state and build new ones to give the state the needed leap; reconcile the government to the people who truly own it, reconcile the elite to the masses, reconcile the people of Owerri whose markets have been destroyed, lands forcefully acquired and buildings demolished. He said his government would also embark on loot recovery in the state, even as he vowed to recover to the last kobo every assets or funds looted in strict compliance with the laid down rules.

He regretted that some people "in the state do not understand the enormity of the problems. There is no state to govern any more and that was why I said that Imo State has knocked engine and I am the only person that can fix for drivers to come and drive it. I am the only person that has a float. I have float of the documents handed over to me by Udenwa and the ones I handed over to Okorocha. I have copies of all the documents, including CofOs".

He added: "I will hit the ground running and hand over to Owerri Zone after four years. It is not a long time. Before you close your eyes and open it four years is gone and we are in 2023. Those who contested in 2015 thought that 2019 was a long time and today it is like it was yesterday. I have only four years and it is the greatest assurance to Owerri people that in 2023 they will take over from me seamlessly".

The former Governor who has gone to court to swear to an affidavit of 38 points of what he would do when elected for second term noted that the acquisition of material wealth means nothing to him. He said:  "I was following the steps of M.I Okpara who performed very well but did not build a house for himself. As Governor I did not allocate any piece of land to myself. This is the only house I have in the whole of Owerri and I built this house in 1992 when I was Commissioner under Evan Enwerem of blessed memory.

"M.I. Okpara did not build a house for himself. It was C. C. Onoh who built a house for him and furnished it. Over acquisition of money and material wealth means nothing to me. I have asked anyone with proof of any mansion belonging to me in Owerri to come forward and collect N10M."