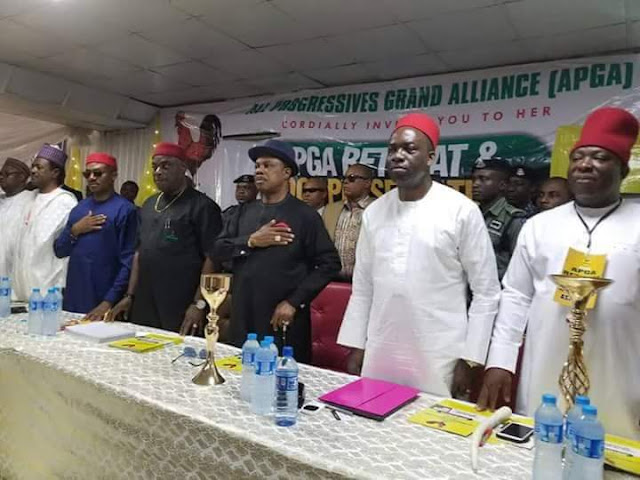 Leader of All Progressive Grand Alliance (APGA) and Board of Trustees (BOT) chairman, Gov Willie Obiano has emphasized the need for free and fair primaries ahead of the 2019 elections.

Addressing all aspirants on the All Progressive Grand Alliance (APGA) party platform, Obiano urged them to adopt virtues of good sportsmanship in eschewing all forms of violence.

Gov Obiano said this on Wednesday, Sept. 12 at a Retreat/Book presentation of APGA at Finotel Classique hotel, Awka.

The governor, who was Special Guest of Honour at the event acknowledged that APGA had truly gone through many challenges to emerge a strong party, growing from a seemingly regional party to a more robust and  national party.

Gov Obiano observed that the book entitled "APGA: TRIALS TRIBULATIONS AND TRIUMPHS" encapsulated the party's political journey so far. He noted that the triumph of APGA was as result of the passion, commitment and dedication of the founding fathers to the party's ideology.

The governor was delighted that the upholding of these ideals has attracted men of courage and character to the party. He however cautioned that all hands must be on deck to ensure fairness and equity in all party affairs especially in the forthcoming party primaries.

Buttressing the governor's position, the National Chairman of the Party, Ozonkpu Victor Ike Oye emphasized the need for the party to promote and sustain internal democracy. 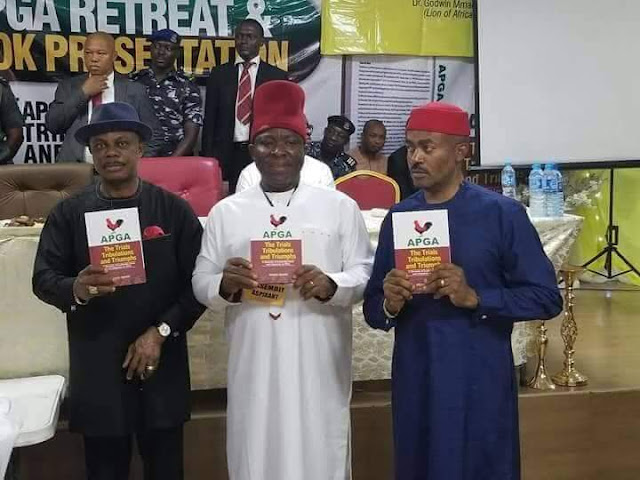 He observed that the time is ripe for the party to consolidate and take advantage of Gov. Obiano's sweeping second term victory and achievements in Anambra state, to expand and make an emphatic statement in the 2019 polls in which the party shall field a presidential candidate.

Chairman of the occasion and renowned international medical practitioner, Dr Godwin Maduka extolled the achievements of the party in Anambra state through Gov Willie Obiano.

He observed that the conduct of the party and the achievements of Gov. Obiano in all sectors of the state's economy had singled Anambra out as a safe haven for Ndi Anambra.

"The state is also safe haven for investors and a recognised model with strategic, systemic and progressive trajectory for socio-economic development and political growth."

Former Minister of Information, Mr Labaran Maku enjoined party members to uphold its ideals and build on past achievements to usher the party into a new era.

Maku, the Party's Gubernatorial Aspirant in Nassarawa State said APGA’s commitment to good governance would surely stand it in good stead to perform well in the upcoming polls.

Also speaking at the event, former National Chairman of the party, Senator Victor Umeh expressed delight at the progress the party has made, acknowledging the honour done to him and other foundational leaders of the party.

While commending the present party leadership, he urged them to uphold the vision of the founding father -- late Dim Chukwuemeka Odumegwu Ojukwu.

Delivering the keynote address earlier at the occasion, Guest Speaker, Prof Chukwuma Charles Soludo underscored the need for APGA to uphold, protect, sustain and maintain its ideology and manifesto.

Soludo re-emphasized the need for APGA to rise to the challenges of the entire country and provide needed leadership.

According to him, changing the political narrative of Nigeria must become a priority task for APGA whose resurgence and emergence in national politics is not only key but whose strategic vision will introduce a much needed panacea to the Nigerian quagmire.