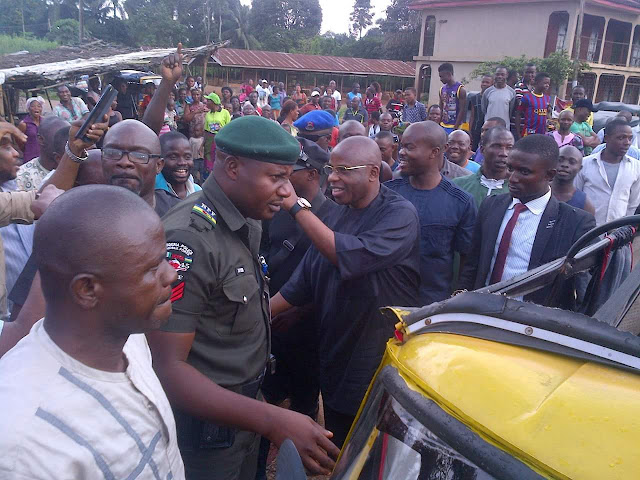 On May 10, 2018, His Excellency Dr. Ikedi Ohakim swore to 36 points affidavit at the Imo State High Court. On paragraph 8, he denied the allegation that he acquired mansions in Owerri and other parts of the world.

He said: "That I state for the avoidance of doubt, that contrary to the live TV broadcast by Governor Rochas Okorocha on Monday January 4, 2013, I never built, bought or acquired any of the property Okorocha alleged belonged to me. That I still live in my 3 bedroom bungow in PREFAB area of Ikenegbu, Owerri Imo State, which was allocated to me in 1992 when I served as Honourable Commissioner for Commerce, Industry and Tourism under an Owerri son, Governor Evan Enwerem of blessed memory, who later became the President of the Senate of the Federal Republic of Nigeria".

Out of the abundance of the respect Ikedi Ohakim has for Imo people, we want to state categorically that he does not have a mansion at Prefab Aladinma Housing Estate behind St. Andrew’s Anglican Church as alleged. Ohakim's house at Prefab as stated above is a 3bedroom bungalow which was bombed down in 2014.

He does not own any building any other place in Owerri, let alone an imaginary two storey building along Wetheral Road, Owerri.

Ohakim does not have a plot of land at the Civic Centre, Owerri. He gave the one plot of land allocated to him by his predecessor, Chief Achike Udenwa, to an illustrious Imo son who built his house on it and has been living there. He did not build a mansion for his in-laws at Anara Mbano.

The truth of these allegations is well known to Imo people and Governor Okorocha. In fact, Governor Okorocha had few months ago said that Ohakim did not acquire wealth for himself and does not even have a house in Owerri except the 3bedroom bungalow which he said was not befitting a Governor, and that he was building a house for him.

We believe that anyone who had contrary proof of Ohakim's claims in his affidavit could approach the courts. When Ohakim swore to that affidavit he was fully aware of its implications but he did so knowing them to be the truth only.

It is therefore unfortunate that some enemies of Imo people have chosen to continue in spreading falsehood against Ohakim and to deceive Imo people. To this end, we will without hesitation give N10M to anyone who presents any proof that Ohakim owns the buildings in Owerri or overseas he is accused of.

Imo people are reassured that they have His Excellency Dr. Ikedi Ohakim on their side and he will not be deterred by any ranting from the enemies of Imo people. His commitment to recover Imo State and fix the knocked Imo engine is 100%.

Ohakim is not a greedy person. He is contented, very happy living in his 3bedroom bungalow. For him, acquisition of wealth is mundane and holds no attraction. The greatest happiness Ohakim has is rendering services to the people at all times. This he will continue to do when he wins the 2019 governorship election for one term only.

However, Ohakim's contentment is unlike the greed experienced under the Okorocha administration where public assets have been acquired. It is noteworthy that Okorocha's son in-law, Uche Nwosu, who is running for governorship has a mansion at the Civic Center, Owerri where Ohakim as Governor does not eveb have any. This is not mentioning other members of the Okorocha family and their cronies who have taken over the lands at the Civic Center and everywhere else in Imo.

Under the Okorocha administration land grabbing by government officials and members of the Okorocha family has been a nagging issue. Imo people have since lost count of properties acquired by Uche Nwosu, Okorocha's family and their cronies in the state, including hotels, schools, filling stations, shopping malls, housing estates, cars, land, etc. Uche Nwosu now owns the most expensive school in Owerri.

It is in order to keep these ill gotten wealth that Okorocha is bent on making Uche Nwosu his successor. But Imo have a clear choice to make between land grabbers, insatiable greedy persons and Ikedi Ohakim who is God fearing, who conquered greed and not attracted to worthless acquisition of wealth.