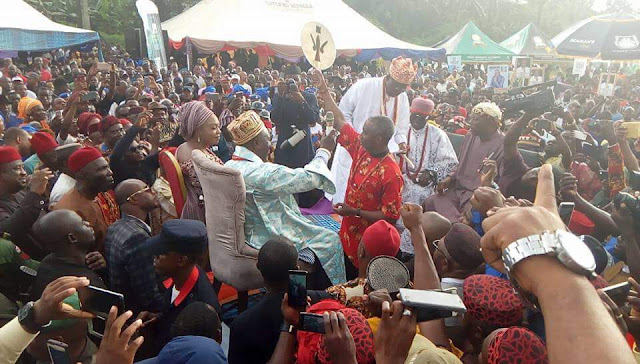 My attention has been drawn to a publication with the caption.“HOW WE USED INTIMIDATION, MEDIA & THUGS AT IRIJI MBAISE” which was credited to me; and it is trending on the social media.

The name is mine and the contents, but the Caption is not mine, which means, an unauthorized encroachment on my intellectual property. The caption of my work is “THE POLITICAL DIMENSION OF 2018 IRIJI MBAISE”. One Chibuike Ozuzu and one Ike Ogbonna are behind this mess. I have alerted the appropriate quarters and I have been told to do a formal petition to that effect, which I won’t hesitate to do. People cannot be hiding under the social media stuff to be doing stinking things.

And this is what we see when uninformed, morally decayed, ungodly and untrained elements get involved in a chosen enterprise.

I however, re-publish my work under.

THE POLITICAL DIMENSION OF 2018 IRIJI MBAISE

To outsiders, what happened at Central School Itu Ezinihittee Mbaise play-ground on Wednesday, August 15, 2018 was the usual Iriji Mbaise Ceremony, for the 2018 Version. But to those from Mbaise especially those of them in the All Progressives Congress, APC, or in the Rescue Mission Government, it was more than Iriji Mbaise. The event spoke volume of the emerging Political “Ororography” of Mbaise nation at the moment. Some people may not understand.

I also make this allusion for the sake of where we are going with this piece. It calls for sober reflection when you are beaten with your two hands down, in a game you think you are the best or Joshua the boxer. And do not also allow elements on the other side of the divide to know the secret of your undertakings or the force behind your garagara. Once that is discovered, the person’s reign is over and his defeat very easy at a very short notice. That was part of what happened at Mbaise. The usual hunters became the hunted. And they were hunted until they recoiled or retreated to their private residences for their own personal “Irijis” and left the arena for the main Iriji Mbaise for the owners of the land or the new landlords. My people, my people.

The Political cabal in Mbaise had, for a long time, terrorized the land with their Political Power and federal mights. They made maximum use of security agents to harass or intimidate our people and political opponents in the area. Either you belong to where they are or you are an enemy. Intimidation was a veritable tool to them. They left no stone unturned in cowing our people or flogging them into succumbing to their own whims and caprices. They cared less about how anybody felt. To them, they had the yam and the knife. They were thorns in the flesh of everybody including the traditional rulers. But for the 2018 Iriji Mbaise, their trap caught “nkapi”. You know “nkapi?”. I do not know the name of that rat-like dirty and badly smelling animal in English. Once “nkapi” enters your room you must know. It smells badly. It has nauseating odor. If your trap catches it you frown or sigh because you can’t eat it and would also work to do away with the offensive odor. The trap of the Political clique or cabal in Mbaise caught big Nkapi last Wednesday. And they are yet to recover from the shock, and they won’t do so for a very long time. They could not believe what they saw or experienced. You do not take people’s tolerance or patience for granted or as weakness. That was their greatest undoing.

Again, leadership is key in every human endeavour. That is the reason I get worried at times in the Church when some elements would tell you not to look at the Pastor. Worship God and go. It is not true. The conduct or lifestyle of your Pastor has a lot to contribute to what brought you to the Church or why you are in the Church in the first place.

Before now, Hillary Ekeh as the then State Chairman of APC from Mbaise and some other key appointees of Governor Okorocha, for reasons best known to them, became dogs in a manger. They became stumbling blocks. They failed or refused to provide the needed leadership to Mbaise APC members as expected of their positions. And they were not ready to allow any other person to provide the leadership they failed or refused to provide. And as God would have it, they all left at the same time at the heat of the COALITION Politics. The major ones among them left. From Aboh Mbaise to Ahiazu and from Ahiazu to Ezinihittee. And with the 2018 Iriji Mbaise and also for the first time in recent time there was serious synergy among the leaders of the three Local Governments that make up Mbaise.

Hon. Nnanna Igbokwe, as the highest Political Officer holder in Mbaise was automatically allowed to be the Cordinating force or to play the leading role. From Ahiazu you had Hon. Nnanna Igbokwe, Chief Chidi Ibeh, Chief Emma Ojinere and the T/C Chairman Pumping from that axis. From Ezinihittee, you had Dr, Ifeanyi Nwachukwu, Chief Ike Njoku, Prince Pat Abii, Rev. Nwulu, the APC Chairman in the LGA and the T/C Chairman, Anyanwu Bob. And from Aboh Mbaise, you had Sam Onwuemeodo, Prince Chidi Nwaturuocha, Hon. Anthony Atudume, Mrs. Pat Ekeh, Dr. Best Njoku. Severally, we met  and resolved or decided on how to tell and show the Political cabal in Mbaise that enough should be enough. The Spirit was very high. Nnanna Igbokwe and Chidi Ibeh were the Generals of the People’s army. And we were Commanders of the various divisions. We were ready for anything with the mind-set that cowards die many times before their deaths and vallians never taste of death but once. I am quoting from Julius Caesar.

They came up with media propaganda, we followed them bumper to bumper both in the Conventional media and the social media. They were subdued. We declared those who claimed to be Mbaise in diaspora “BEENTOS” who do not come home. And challenged them to mention where their homes are for verification. They recoiled. They intimidated the traditional rulers and we came with our own intimidation. And we have the instrument. The instrument to implement our own intimidation but the cabal lacked such instrument. The Ezes toed the path of wisdom because they could not leave the road to follow Bush Path. We overwhelmed the cabal in all ramifications.

And because this heartless cabal believes so much in using thugs. We also decided to swallow them in that regard. I hold my peace. Do not allow people to know better than what you think you know. It was a clear case of one thug belonging to the cabal to fifty belonging to the allied brothers led by Nnanna Igbokwe and Chidi Ibeh. The exit of the saboteurs was all we needed to take control or take care of this cabal. And we did. And we needed to do all that was needed to do to ensure that our people came out in their thousands. And we succeeded. Whatever they did to discourage our people from coming out was massively countered. We used the media to the maximum. Such crowd as seen last Wednesday had never been seen in any of the previous Iriji Mbaise.

We had sacked the PDP made Ezurueze Mbaise few years ago with the dogged help of Chief PC Onuoha. And while the PDP-born Ezurueze Mbaise was making announcement cancelling the Iriji Mbaise, we were countering them with those of the main Ezurueze Mbaise. And the voice of our own Ezurueze Mbaise was louder and clearer. On August 15, 2018 Mbaise people came out for the Iriji in their thousands and stayed till 7pm when the event ended. And everybody was happy. There was smile on every face at the event. The field was full to capacity and the over-flow was jam-packed by human beings.

Another effort they made was to ensure that the Chieftaincy title Conferment on Uche Nwosu was not done. They came up with cheap propaganda. We came up with solid facts. And they also retreated. When they had failed on that, they began to make clandestine moves to ensure that the Chieftaincy title Conferment was done in the Palace of the Chairman of Ndi Eze Mbaise, HRH Eze Leo Nwokocha. To us, they would also go on Celebration if the Conferment was done in Eze’s Palace. We also moved to take care of that. Chief Ibeh and myself said if we fail to see Uche Nwosu been Conferred with the Chieftaincy title right at the Centre of the field of the venue of the event, we have failed totally. All things being equal, we succeeded in ensuring that the Conferment took place at the venue and with the Traditional Rulers being on the same page with us.

Uche Nwosu was Conferred with the Chieftaincy title of “Ugwumba Oha Nile of Mbaise”. And there was joy. Opponents never believed it could be possible. And that was the reason the Trumpeta Newspaper could not call their reporter who was physically present at the function to know exactly what transpired. They wrote that the Chieftaincy title Conferment was at the Palace of the Eze. They published their mind-set and not what happened. That was unfortunate and unexpected of a media house publishing for the Consumption of the public. You do not feed the public with deliberate falsehood or lies. It is like feeding someone with poison or feeding a Child with a Contaminated milk or soured breast and so on.

The weakened cabal has suffered terrible cuts and they have been struggling in vain to water-down the success story of the event or the propensity of what happened at Iriji Mbaise on August 15, 2018. The memory verse here is that people should know when the centre is holding and when it can no longer hold. In other words, guys should know when the ovation is still loud or when it has waned. And take the needed action, so to say. It is foolhardy for anybody to think that the APC members in Mbaise today would allow anybody or group of persons to take them for a ride again. What is needed therefore is for everybody to play his or her own wing. That is to say, everybody has to, as a matter of necessity respect him or herself and also respect others, so that at the end of the day, right or left, the Mbaise nation would be the ultimate beneficiary. Mbaise must be connected to other parts of the State whether anybody likes it or not, while we Continue to Clap for Jesus.