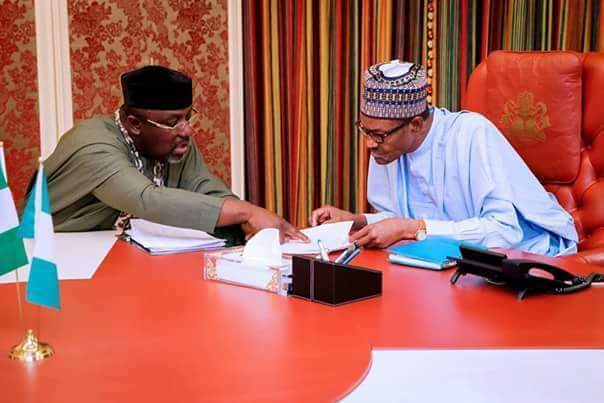 Angered by the administrative pattern of the Rescue Mission Government in Imo State, Association of Retired Permanent Secretaries in the State wants the Nigeria’s President, Muhammadu Buhari to probe the incumbent governor, Rochas Okorocha.

The senior citizens in a letter addressed to Mr President, which was signed by the Association’s Scribe, Comrade F.I AGBA accused Okorocha of the primitive amassing of wealth stating that the action of the governor is an affront on the anti- corruption war of President Buhari.

The pensioners said that such financial display by the number one citizen of Imo goes a long way in putting a question mark on the “war against corruption” by the commander in chief of Nigerian Armed Forces, hence, the call to look into Imo financial affairs.

“The primitive amassing of wealth by governor Rochas Okorocha and the mal-administrative style of government in Imo State is in our assessment a very serious affront on the anti corruption war of your Excellency and inimical to the fortunes of All Progressive Congress (APC) in& our State” they said.

Further addressing the state of Imo economy, Owelle Okorocha was accused of running the State to comatose, by subjecting both the pensioners and the entire Imo citizens to undue hardship, starvation and untimely deaths.

The Rescue Mission administration is also said to be characterized as a lawless, planless, wasteful, insensitive, incompetent and reckless in the deployment of public resources.

In the same vein, the retirees expressed suspicion on reasons why Okorocha wants to eliminate all landmark achievements/legacies of his predecessors.

While they advise the governor to redress his wrong doings in the State, they said many of his behaviours are creating legal obligations in future governments, which would be a great burden when the time comes.