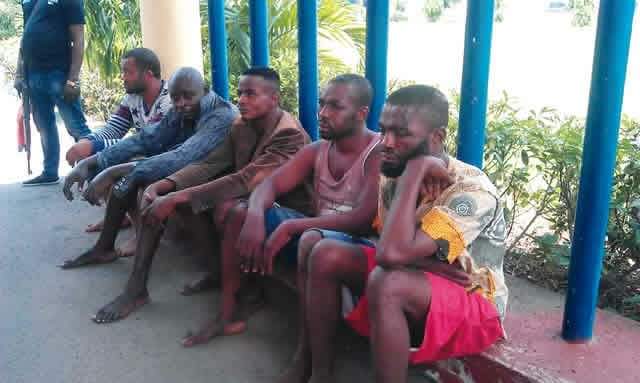 Operatives of the Federal Special Anti-Robbery Squad in the Imo State Police Command have arrested the kidnappers of the Personal Assistant to the member representing Orsu / Orlu and Oru East Federal Constituency in the National Assembly, Mr Jerry Alagbaoso.

Parading the suspects at the command’ s headquarters in Owerri on Thursday , the state Commissioner of Police , Mr Dasuki Galadanchi, said that apart from the kidnap of the lawmaker’s aide, the suspects equally kidnapped other people , including one Mrs Evans Ajaps .

The Commissioner of Police listed the suspects as Chinedu Nlemeke (20 ) from Ihioma in Orlu Local Government Area; Uchenna Ugwueze (34 ) , from Ihioma in Orlu LGA, Ekene Ezeudo ( 36 ), from Akpulu in Ideato North LGA, Chidiebere Nze ( 30 ) from Umuanimoke in Okigwe LGA and Uchenna Anayo ( 39 ) of Nkanu North LGA of Enugu State.

He said , “ Following the shocking murder of the APC chairman in the Ideato North LGA, Sunday Ejiagwu , and the kidnap of the personal Assistant , Mr. Jerry Alagbaoso, of the House of representatives , the command reorganised and re -strategised the security architecture to effect the arrest of the perpetrators of the dastardly acts .

“ The efforts of the command operatives have paid off resulting in the arrest of the five notorious kidnap and armed robbery suspects involved in the various kidnap incidents in the state . In the process of arresting the suspects , one of their victims, Mrs Evans Ajaps of Amadagba Ibiasiegbe in Oru West LGA of Imo State was rescued from the kidnappers unhurt . ”

According to the state police boss , items stolen from the female victims included N670, 000, an Automated Teller Machine card and other valuables.

“ The suspects have made useful statements and have confessed to the kidnap and robbery of the Personal Assistant to the lawmaker and other victims including Henry, Ochendu , Chidiebere and many others, ” Galandanchi said.

He said the command would charge the suspects to court after concluding the investigation.

One of the suspects , Ugwueze, told our reporters that he was sorry for his actions.

One of their victims, Mrs Ajaps , told our correspondent that the suspects kidnapped her while she was going to the market.