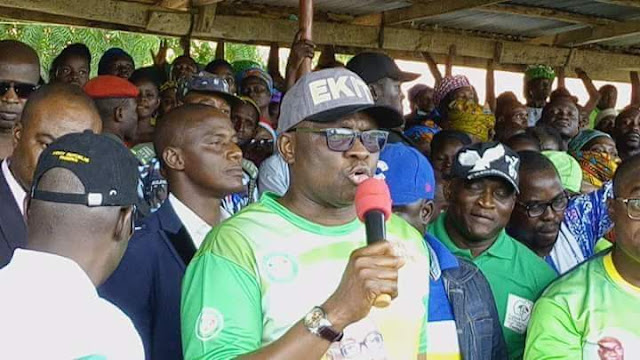 Ekiti State Governor, Ayo Fayose, on Tuesday expressed confidence that his deputy, Prof. Kolapo Olusola, would be declared winner of the July 14 governorship election by the state Election Petitions Tribunal.

Fayose alleged that the governor-elect, Dr. Kayode Fayemi, is holding on to “stolen mandate” which would be retrieved at the tribunal.

The governor claimed that the election was marred by irregularities.

Olusola, who was the Peoples Democratic Party (PDP) candidate in the poll, has declared his intention to challenge the result of the election announced by the Independent National Electoral Commission (INEC) at the tribunal.

The PDP candidate has up till August 3 to submit his petition as the 21-day window to challenge the result is expected to close on that day.

Fayose spoke in Ado-Ekiti on Tuesday during an unscheduled visit to the new Erekesan Market (Oja Oba) which is nearing completion.

The governor, who was cheered by market women during the visit, urged the people of the state to remain calm and be law abiding.

Fayose pleaded with PDP members and sympathizers to keep their cool in the face of alleged intimidation and provocation by the All Progressives Congress (APC).

Speaking on the market, Fayose said he was pleased with the pace of work on the project and quality of work done by the contractors.

Fayose said: “This is the only legacy project we have not completed as we have delivered others such as the flyover, the new high court complex, the new Governor’s Office and the dualization of Ado-Ikere Road among others.

“Though time is no longer on our side, we will surely push this project and as at now only finishing touches remain to be done.

“I will complete it and commission it before I leave. We appreciate the people for their support and cooperation and we want them not to despair. The light is coming after darkness and we shall overcome.”
Posted by IfeanyiCy Njoku
Labels: Politics