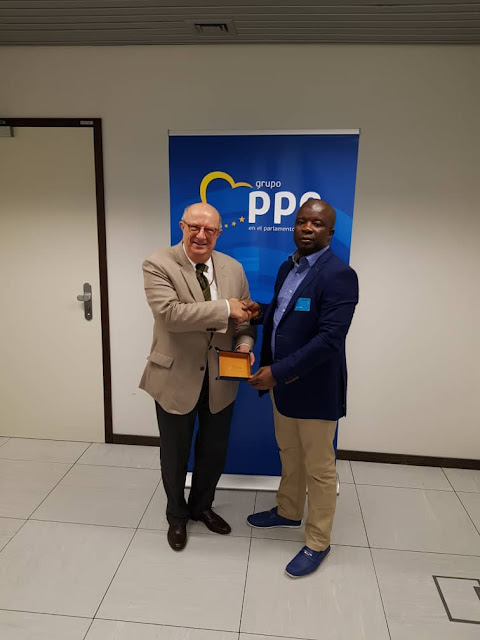 Frontline governorship aspirant in Imo State under the United Progressive Party, UPP and member of the House of Representatives, Hon Tony Nwulu has put in place a mechanism that will lead to massive and huge inflow of direct investment from Europe to the State.

The Imo State born Federal lawmaker who represents Oshodi/Isolo Federal Constituency has been in Brussels, Belgium on the invitation of the European Union Parliament.

The Parliament was impressed with the signing into law of the "Not Too Young To Run Act" , a bill initiated by Nwulu on the floor of the House of Representatives and signed into law by President Muhammadu Buhari.


The lawmaker took advantage of the thumps up from the EU for the Not Too Young To Run Act to engaged some European countries on the need to invest in Imo State, South East Nigeria where he has been endorsed by thousands of youths to take over the mantle of leadership of the State in 2019.

Spain expressed its resolve to be a viable development partner with Nwulu’s Imo State. This was disclosed to the governorship hopeful by Mr. Santiago Fisas Ayxela, a member of the European Parliament after extensive talks and deliberations.

Another member of the EU Parliament, Mr. Gerrad Quille who received Hon Nwulu in Brussels, Belgium engaged in mutual discussions with the Imo State Governorship aspirant on the need to strengthen youth mainstreaming in Politics and expressed his readiness to go into viable development partnership.


The need to make Imo State an economic hub came from Mrs Maria Arena, another member of the EU Parliament and Head Belgium International Trade Council who held mutual discussions with Hon Nwulu.   This is expected to translate in making Imo State an economic boom by the time Nwulu is elected at the polls and takes over the reigns of governance of Imo State in 2019.

Massive reactions have however trailed Hon Nwulu’s initiative as many Imolites at home and in Diaspora have applauded the 39 year old lawmaker for considering the development of the State a top priority.

An observer posted on social media ” Thats what digital governance is all about. We need this generational shift from analogue to digital. We in the Mezie Imo Movement remain resolute in our commitment”