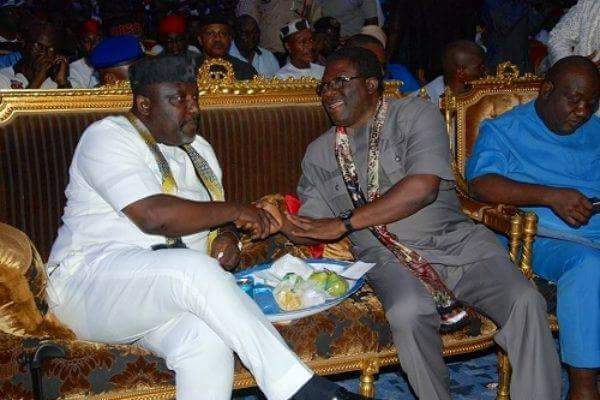 Imo State Governor Rochas Okorocha has appealed to the Deputy Governor, Eze Madumere, to face the charges and stop accusing him of spearheading plans to remove him through the House of Assembly.

The House had accused the Deputy Governor of gross misconduct, conviction for theft in the United State (U.S.), dereliction of duty and other charges, leading to a recommendation to the state Chief Judge, Paschal Nnadi, to set-up a committee to investigate him (Madumere).

In a statement by Okorocha’s Chief Press Secretary, Sam Onwuemeodo, the governor regretted that his deputy was casting aspersions on him for his ordeals with some members of the Assembly.

Okorocha added that Madumere’s claims and talk about imaginary inconveniences as part of his experiences, was the height of pettiness.“It is the height of pettiness for Madumere to talk about imaginary inconveniences he claimed he experienced during the outings of his benefactor, but carefully skipped mentioning the favours, benefits and patronages he had enjoyed all these years,” the statement reads.

It also pointed out that Madumere had long returned to Nigeria from the United States before they met, adding: “He should be Christian enough to state that he has remained under Okorocha’s tutelage and employment.”