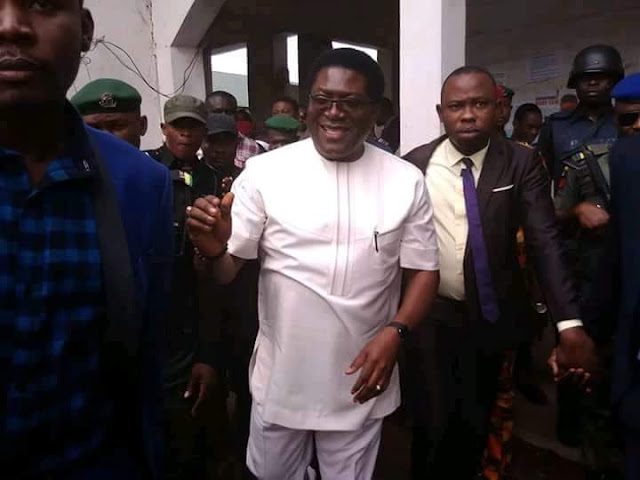 
Members of the Imo State House of Assembly on Monday evening removed the Deputy Governor of the state , Eze Madumere , from office for alleged misconduct .

Madumere ’ s removal by the lawmakers came few hours after an Imo State High Court in Owerri , the state capital , gave an order, halting further steps in the impeachment proceedings against the deputy governor .

The embattled deputy governor recently fell out with his principal , Governor Rochas Okorocha.

The deputy governor , who nursed the ambition of becoming a governor in 2019 , was said to have opposed Okorocha’s endorsement of his Chief of Staff and son -in -law , Uche Nwosu, as a possible successor .

Shortly after he was removed from office on Monday , Okorocha announced the Head of Service in the state , Calistus Ekenze , as the new deputy governor .

It was learnt that the motion for Madumere ’s removal from office was moved on the floor of the House by the Majority Leader, Lugard Osuji, who represents Owerri Municipal .

Besides Osuji and Onyewuchi , 19 other lawmakers present during the proceedings supported the motion to remove Madumere .

The state House of Assembly said it found the deputy governor guilty of all the allegations of misconduct levelled against him .

In an interview with one of our correspondents on Monday evening , the Majority Leader denied that the lawmakers received N 5 m each to remove the deputy governor .

“There was no financial or material inducement, to the best of my knowledge . We only carried out our constitutional responsibility . It is an insult to say that lawmakers were given N 5 m to impeach the deputy governor ,” he said .

Osuji also confirmed that the House had received a letter from the governor nominating the Head of Service , Ekenze , as Madumere ’s replacement .