HOODLUMS HAVE TAKEN OVER APC OFFICES IN IMO 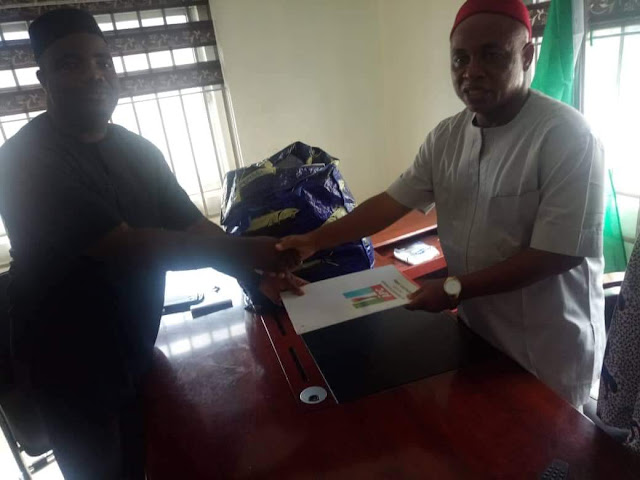 Imo State Chairman of the All Progressives Congress (APC), Chief Hilary Ekeh was once state chairman of the Action Alliance (AA), a party founded by Chief Rochas Okorocha, Goveornor of Imo State before it went moribund. Ekeh fields questions from AMBY UNEZE on why the party will not participate in the local government elections ordered the governor and what led to the emergence of a group called APC Allied Forces in the state

Your re-election as the Imo State Chairman of the APC was opposed by Governor Rochas Okorocha, but you still won. How did it happen?

The journey of APC in Imo state is a long story, but I will cut it short. It is the Lord’s doing. I never believed that I will come back as the chairman because the Governor did not want me back. It was not because I committed any crime, but it was due to his ambition to foist his son-in-law on every member of the party. Maybe, he felt that by being chairman of the party, I will not grant him that request. Be that as it may, the will of God prevailed. To God be the glory, I am the chairman of the party today. I want to use this opportunity to thank Imolites and the APC family in particular for finding me worthy to return as their chairman. I want to put every other thing behind me and I am appealing to everyone to come back so that we will work together to move this party forward. I have already declared my winning as ‘no victor no vanquished.’

Is there any division or parallel APC State Exco in Imo State?

There is no division or parallel leadership in the state APC. We have hoodlums that are occupying our office and we don’t want to join issues with the scavengers. We only want to be on the side of the law. The law says ‘status quo ante’. They are disobeying the order of the court; because they went to court on May 18, and got order that says ‘status quo ante’ meaning that ‘let everybody remain as they were before coming to court, and on May 24, they appointed another person as chairman, brought him into the office and disregarded the court order. We are not joining issues with them. For the fact that we are keeping quiet does not mean we are weak.We can also move there but we don’t want to do that. We advise the governor to ask those ‘touts’ in the office to vacate in their own interest.

What is APC doing about the impending local government elections?

APC is a law-abiding party. If there is no court injunction or order stopping the government from conducting fresh local government elections, we will participate, but if there is an order anywhere in this country stopping government from conducting LG elections, we will not participate. For now the matter is still before the Supreme Court and it has not been finally disposed of. So we will not do anything contrary to the rule of law.

What about the APC coalition’s plan towards 2019?

The APC coalition or what we call the Allied Forces are just Imolites in APC who saw that the party was drifting towards losing the 2019 elections and they came together to work to stop it and say ‘enough of the aberration by just one man to bring the party down in the state’. The Allied Forces want the right thing to be done in the party. They want due process to take place in the party so that the party can win elections in 2019 in the state. The issue of endorsement is not in our constitution. The Allied Forces are saying ‘let there by a level playing ground’ for all APC members who are aspiring for any position to have an equal opportunity to aspire and contest; so that if a person wins he knows he won honourably and if he fails he also knows. In other words, let the people choose who will governor or represent them. We will make sure that whatever election APC will be involved in the state – local government, state or national, there will be a level playing ground for all contestants.

How prepared is your party towards holding successful primaries for 2019?

With the Allied Forces, we are happy because right now the party can speak with one voice, we will follow the constitution of the party to hold our primaries. We are very much prepared for 2019 elections. APC is better now and we are glad. We want to use this opportunity to thank President Mohammadu Buhari for his support for democracy, instead of doing whatever he likes as the leader of the party in the country, especially in Imo State where the party at the national level sent those who conducted the congresses and wrote their reports and they party accepted it because they did a very good job. I give kudos to Mr. President for allowing democracy to prevail. I have no doubt that he will lead this country to greatness and I wish I have the powers I would have asked him to continue to lead this country until God decides.

On zoning in Imo State what is your opinion?