Drake thanks Wizkid and Tekno for inspiring his new album ‘Scorpion’ 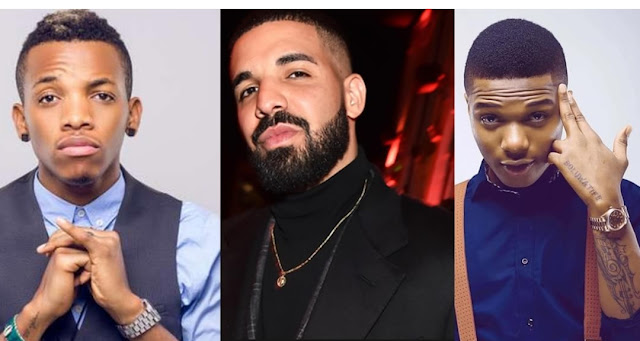 Shortly after his album was released, Drake took to his Insta-story to share Tekno’s Jogodo & Wizkid’s Soco cover, alongside that of other artistes who inspired him. Here are they below;
In the lead-up to Scorpion, Drake’s just-released double-sided album, there was much speculation about the meaning behind the title. The clues led to… astrology (Drake is a Scorpio). But the title also suggested that Drake, who’d been embroiled in a fiery beef with Pusha-T, was prepared to sting. Now that the album is here, though, it seems that, above all, Drizzy was inspired by a scorpion’s color palette: The album is shades of grey, making it feel like a spiritual sequel to 2016’s Views. It is slow Drake, moody Drake, minimalist Drake. For the most part, the music blends in with its surroundings—which is to say, it fades into the background, becoming a petty and self-serious sort of white noise.

The album is Drake’s first project since 2017’s More Life, which he billed as a playlist. It’s his first album since 2016’s commercially successful but critically panned Views. The difference between an album and a mixtape or playlist is unclear, but it’s a distinction Drake takes pains to make.

On his Mariah Carey-sampling song “Emotionless,” Drake addresses Pusha-T’s “Story of Adidon” accusations of Drake fathering and hiding a child. “I wasn’t hiding my kid from the world, I was hiding the world from my kid,” he raps. He continues: “Breaking news in my life I don’t run to the blogs/the only ones I want to tell are in my phone I can call/They always ask, ‘Why let it run if it’s false’/You know a wise man once said nothing at all.”

He more directly addresses that he’s a father on the album’s final track, “March 14”:

Yesterday morning was crazy, I had to come to terms with the fact that it’s not a maybe
That shit is in stone, sealed and signed
She not my lover like Billie Jean, but the kid is mine
Sandy used to tell me all it takes is one time, and all it took was one time
Shit, we only met two times, two times!
And both times were nothing like the new times
Now it’s rough times
I’m out here on frontlines, trying to make sure that I see him sometimes
It’s breaking my spirit
Single father, I hate when I hear it
I used to challenge my parents on every album
Now I’m embarrassed to tell ’em I ended up as a co-parent
Always promised the family unit
I wanted it to be different because I been through it, but this is the harsh truth now.
Posted by IfeanyiCy Njoku
Labels: Entertainment Gist