Dismissed US soldier nabbed in Owerri for defrauding visa seekers 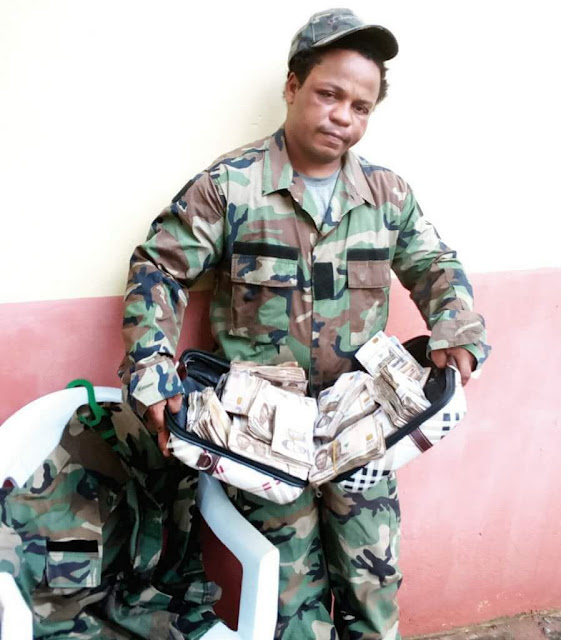 Operatives of the Federal Special Anti -Robbery Squad in the Imo State Police Command have arrested one Garrick Slacks , a dismissed United States soldier , for allegedly defrauding Nigerians with fake promises to secure visas and other travelling documents to US.

Southern City News learnt on Sunday that the suspect , who was arrested on Saturday , was in the custody of the state Police Command in Owerri .

The police source, who did not want his name in print , said , “He was a serial fraudster who had used his position as a foreigner to defraud Nigerians , who are desperate to travel abroad , especially to the US. ”

The source alleged that the dismissed soldier was in Nigeria on a special mission to defraud Nigerians , adding that he changed his location immediately money was paid to him .

“He is a serial and sophisticated fraudster . He was arrested this afternoon ( Saturday ) while he was hurriedly leaving Owerri for Port Harcourt .
“He is equally impersonating the US Army and Nigerian Army at the same time . His targets are mostly women . He would promise them marriage and tell them that he had the capacity to secure their visas and other travelling documents to America with his position as a colonel in the US Marine Army and as an American citizen .

“He has confessed to the crime and the forensic investigation we have done using his fingerprints revealed that he is a wanted man in California and he only ran to Nigeria in February to continue his heinous crimes .

“Just five days ago , he defrauded a young widow N 500 ,000 with a fake promise that he would secure stay visa for the widow’ s three children. He was about running away from Owerri before we tracked him. Could you imagine that the lady we used in tracking him, he had promised to marry her on meeting her for the first time this afternoon ( Saturday ) .”

Exhibits recovered from the suspect , according to the police included a cash of over N 2m , two pairs of military uniform, military fez cap , jungle boot , fake military identity card , fake driving licence and a car , which he used in making his fraud look real .

“All the exhibits we recovered from him are fake . The military identities which he used to make his fraudulent activities look genuine . He was even beating security men to this game until we nabbed him ,” he said .

When interviewed , the suspect told Southern City News that he was sorry for his actions and was ready to make amends if given the opportunity .

He admitted that he was dismissed from the US military in 2015 over his involvement in cocaine peddling .

He said that he came into the country in February and was ready to refund one of his victims ( the widow ) her money.

The widow , who was one of his victims , told our correspondent that she fell into the suspect ’s trap in her bid to afford good life for her three children.

He described the development as one of the dividends of community policing in the state as instructed by the Inspector -General of Police , Mr Ibrahim Idris .