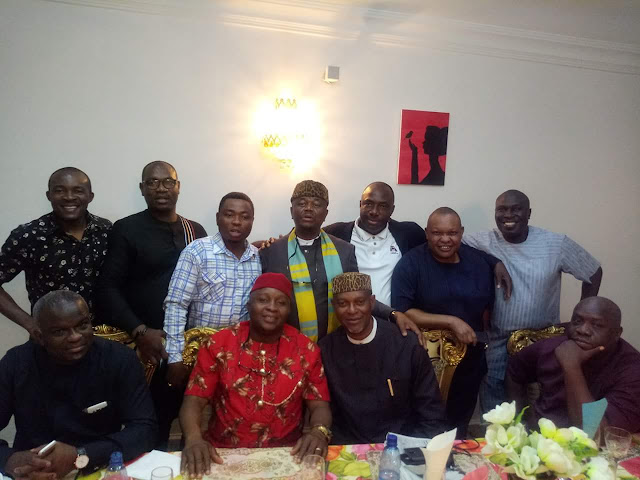 While the governor of Imo State, Owelle Rochas Okorocha has been junketing between Owerri and Abuja in a bid to relaunch himself back into the politics of APC at both the State and National levels, there is fire at his backyard at the moment.
The trouble bedeviling his formidable political camp known as Rescue Mission is not unconnected to the recent primaries conducted by his faction of APC for the scheduled LGA elections in the State. The manner the primaries was held has torn apart members of the political group who have been with the governor for a while.
Trumpeta learnt that apparently wanting to boost his political group and solidify base ahead party primaries for 2019 election, the governor came up with the LGA election which he has ignored since coming on board in 2011. The positions are vigorously being contested by his acolytes under the Rescue Mission camp of APC.
Investigation by the newspaper reveals that instead of fostering unity and oneness in the Rescue Mission ahead challenges against opponents, the conduct of the primaries for councillorship and chairmanship has left the group in tatters.
While primaries for the chairmen were held last Saturday, that of councilors based on autonomous communities level took place on Tuesday under APC leadership of Chris Oguoma, the Okorocha camp used state influence and paraphernalia of office to install as acting chairman of the party against Hilary Eke executive the NWC of the party recognizes.
Reports across the 27 LGAs have it that apart from violent clashes, irregularities and malpractices dominating the exercise, internal schisms have already crept into the governor’s camp with aggrieved aspirants and supporters in the group spreading accusations of malpractices and marginalization.
Majority of those lamenting how they were rigged out and denied opportunities to have a free and fair contest are threatening to dump the Okorocha group for the Coalition, otherwise, known as the Allied Forces.
According to details, the outcome has brought division in all the LGAs in the State. In Ahiazu, a dependable ally of the governor who has been with the number one citizen of the state since their APGA days, Chief Adactus Onuoha may call it quits with the Rescue Mission if the manner primaries of the group was conducted last Saturday are considered. 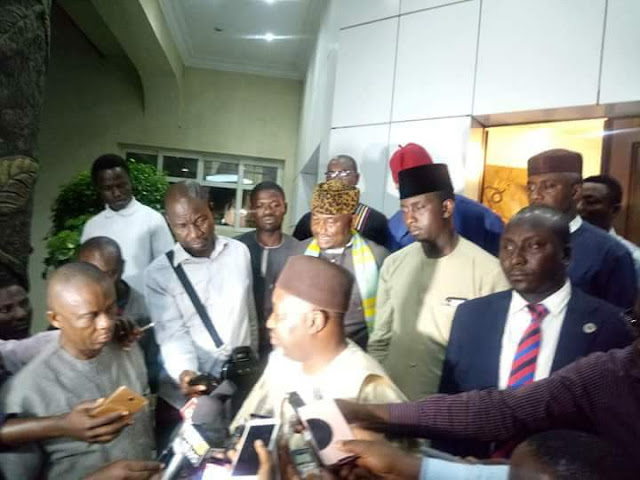 Trumpeta was told that Onuoha, whose elder brother and political Iroko in Mbaise land, Chief PC Onuoha, has been a strong backer of Okorocha since 2011, got screened out and couldn’t have his name on the final list of aspirants cleared to run for the chairmanship of the contest the action saw Onuoha not able to run for the election.
It was not only Onuoha that was affected in the exercise in Ahiazu, other followers of Okorocha in the LGA were also schemed out to favour a particular interest.
Same disturbing scenario is also playing out in Oru West LGA where two loyalists of the governor who lost out in controversial circumstances are crying foul and calling for Okorocha’s intervention.
According to one of them, Ikemefuna Obioha in a petition to the State party chairman through his lawyer D. Ike, the conduct was marred by irregularities “the election of that day was a colossal failure and wholly rigged owing to the fact that they result sheets in that election was never issued to the presiding officers who were APC party faithful in Oru West LGA.
The petitioner alleged that the LGA party chairman was under detention at the DPO office at the instance of a serving commissioner and another chieftain of the party. The allegation further stated that one of the aspirants connived with others named in the petition to use thugs from Umuahia to dislodge card carrying APC members on the day of voting.
Obioha’s petition was also in line with one of the appointees from the area, Chris Ekwueme whose allegations suggest that the camp of the governors is at the brink of collapse, following the results made public as records for the primaries.
Ekwueme, SA on security for Orlu zone also running for chairman of the LGA said there was no collation in the LGA for a winner to emerge.
The story is same in Oguta LGA where believers of Okorocha’s government are at war over the outcome of the primaries. A major stakeholder in the Government and appointee of Okorocha Jeff Nwoha of ENTRACO fame is at the losing end including another popular Rescue Missionary, Okey Igwe. Their supporters are crying open day robbery in the result that favoured the TC Chairman of the area, Barr Mgborokwu.
In Ohaji/Egbema, the denial of victory to Chief Enyia, popularly known as Canada in favour of the TC Chairman, Ebenezer Amadi is causing disaffection in the governor’s camp.
Trumpeta learnt that majority of the APC members on the side of Okorocha rooted for Enyia before the congress but were surprised at the outcome when suspected underhand practices were used to make the TC Chairman winner.
Further reports have it that the Rescue Mission group in Ngor Okpala is suffering from similar crisis resulting from the disqualification of the TC chairman, Hon Chidi Eke in favour of another pro Okorocha member of the party, Chinwe Obinna who stood alone for the ticket and was considered winner.
One of the lawmakers who believe in Okorocha is said to be thinking of quitting the Rescue Mission group because of the manner the primaries was organized. The House member, Lawman Duruji of Ehime Mbano is about dumping Rescue Mission due to the controversy arising from the conduct of the primaries.
In Aboh Mbaise LGA, report revealed that there will be mass defection to the opposition group if the governor insist on re-running primaries to favour Hon Mrs Esther Eburuche, the Transition Committee who was voted out in last Saturday primaries in the area.
In Ihitteuboma tension is now high over the rerun primaries as the leaders are now divided on the issue at the moment.
The commissioner for public utility, Hon Mark Uchendu and Dr Mrs Uche Ejiogu are member representing Ihitteuboma in Imo State House of Assembly are not in one page leading to services disagreement while Hon Mark Uchendu want harmonization, Dr Ejiogu is demanding that all the Aspirants should go to the field and test their popularity. This decision did not go down well to some of the stakeholder.
Information available to the newspaper has it on good authority that the aggrieved members are plotting to ditch Okorocha and his Rescue Mission government should the exercise be left to go the way without looking at the complaints of aggrieved people.
Meanwhile, some appointees have lost their positions in the cabinet while two names submitted to the House of Assembly for approval as commissioner in ISIEC.
Governor Rochas Okorocha of Imo State has forwarded list of two Commissioner Nominees to the Imo State House of Assembly for approval.
All of them were appointed into the Imo State Independent Electoral Commission (ISIEC). They are Chiefs Luis Adebionu and Ferdinand Uzodinma.
In a statement signed by the governor’s Principal Secretary, Dr. Paschal Obi, and read on the state owned Imo Broadcasting Corporation (IBC), said the list has been forwarded to the state assembly for legislative action.
In another development, the governor has also approved the disengagement of seven of his political aides.
Dr Obi mentioned the names of those affected as the Senior Special Assistant on New Cities Development, Dr. Henry Okafor, Special Adviser to the Governor on
Trade and Investment, the following Commissioners in the ISIEC, Dr. I. K Madu, Prince Oke Ukwuegbu, and Maxwel Nwokeji.
Others are the Secretaries of the Onuimo and Orsu Local Councils, Mrs. Olivia Ijioma and Osonye Georgina, respectfully.
According to the statement, the disengaged persons were directed to hand over government properties in their possession to the next most senior public servant in their establishments.
He thanked them for, “contributing in driving the main programmes and policies of the Rescue Mission agenda, wishing them well in their future endeavours.”