MY COVENANT WITH IMO PEOPLE : OHAKIM SIGNS AFFIDAVIT IN COURT 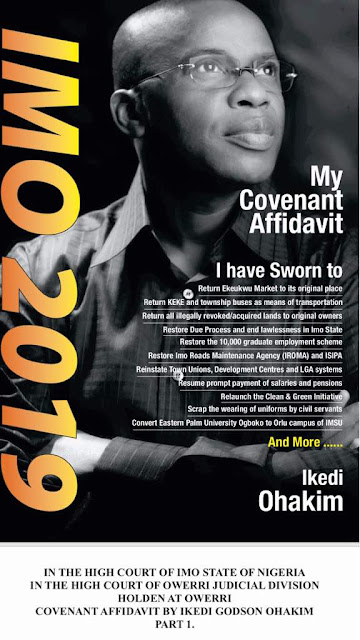 I, Ikedi Godson Ohakim, a Nigerian citizen, Christian, Adult male, Honourable Commissioner for Commerce, Industry and Tourism Imo State Nigeria (1992-1993), Governor Imo State Nigeria (2007- 2011) and resident at Burma Retreat, Okohia in Isiala Mbano LGA of Imo State, do hereby
make Oath as follows:
1. That I shall seek the votes of the good people of Imo state for ONE TERM LAST TENURE only (as governor of Imo State in the 2019 election).
2. That in cognition of my privilege and informed knowledge of the affairs of Imo State, I have the bounden moral, political, economic, social and spiritual responsibilities to the people of Imo State of Nigeria and humanity at large, to challenge and address the wasteful, treacherous, deceitful, capricious, autocratic, totalitarian and perceivably draconian malady that has entangled Imo State of Nigeria between 29/05/2011 and the time of this Oath.

3. That my current mission will be nothing else but:
(i) To address the urgent issues of Economic Revival; Loot Recovery; Reconciliation and Return of Imo State back to the hands of God.
(ii) To liberate Imo State from the rapacious and capricious mismanagement of the affairs as well as the callous and mindless misappropriation of the resources of the state.
(iii) To Re-erect all good governance structures deliberately and ignorantly demolished by
Governor Rochas Okorocha.
(iv) To purify the system; restore our Christian and Traditional values,seek adequate closure on a discredited era; prepare the next generation of leaders and return our state to a more civilized brand of politics devoid of thuggery, gangsterism and brigandage within 4 years.
4. That I am constitutionally quali􀃽ed, mentally matured, physically sound, competent,
experienced and that I understand completely the “NUTS and BOLTS” of Imo State government.
5. That having acquitted myself in my 􀃽rst term as Governor who handed over to Governor
Rochas Okorocha, I enjoy a unique governance experience and institutional memory to hit the
ground running at the blast of the whistle, to rekindle hope for a future anchored on democratic rights, due process, economic growth and job creation.
6. That I wish to state categorically: that in my 􀃽rst term as governor, I conducted the day to day running and management of the affairs of Imo State with utmost probity, sterling integrity,
transparency and due process. That I obeyed all court judgments and orders and respected rules of engagement in the contract system, without exposing the state to any commercial risks. That I consulted extensively and worked harmoniously with all stakeholders in the state. That as a result, there was no judgment debts against my administration, no contract failed and no contractor made away with tax payers money in spite of the fact that we deliberately stimulated the economy and created wealth in the State by deploying over 2000 local small-scale contractors for projects and infrastructure maintenance scheme in the 305 wards, that in turn employed over 60,000
strong local workforce.
7. That I state for the records that of the 88 Bills of the State House of Assembly between 2007 and 2011, more than 50% were my Bills (47 Executive bills) in promotion of good governance and due process.

25. That the newly opened “EASTERN PALM UNIVERSITY” in Ogboko Ideato LGA, Captured on
page 12 of Okorocha’s 2013 budget speech as “IMO EUROPEAN UNIVERSITY” shall become
the Orlu campus of Imo State University. That admission into all government tertiary Institutions
shall return to what it was in my 􀃽rst term, i.e.70% for Imo sons and daughters and 30% for
non-indigenes and not the other way round, which is what obtains under Okorocha.
26. That it is on record that Imo State radio and television corporation (IBC) is completely
dilapidated. Management and staff are owed several months of unpaid salaries and pensions.
Whereas, Governor Rochas Okorocha and his extended family members have built, equipped and
commissioned for themselves a state of the art multi Billion Naira Radio and Television complex
behind a prominent hotel in New Owerri capital Territory. This media complex shall on my
assumption of of􀃽ce become part of Imo Broadcasting Corporation.
27. That all statues indiscriminately erected in the state that do not glorify God including the
worthless and diabolical evil hand on Aba Road, Owerri, shall be pulled down by the divine will of
the Lord God Almighty upon my assumption of of􀃽ce.
28. That the 10,000 Graduate Employment Scheme in my 􀃽rst term was a well thought out
program, designed to create mass employment for Imo youths, reinvigorate the civil service and
deploy science and mathematics teachers to Imo school system. That the scheme shall be
restored and improved and the ban on Development Centers lifted.
29. That I shall cause to be reviewed the Imo State of Nigeria 2011, law No. 18 by Okorocha
administration. Section 5 and 6 of this law with particular attention to 5(b), which authorizes the
Governor to borrow money up to the tune of two hundred billion naira (N200b) without prior
approval from the house of Assembly. That this bizarre law translates to handing over a blank
cheque to a governor. No man is good enough to exercise power without reasonable checks and
balance.
30. That I wish to categorically state: that Imo under Okorocha has become an unpardonable
environmental disaster. That this condition is a crime against humanity under article 18 of Banjul
Charter on Human and Peoples’ Rights. That access to drinking water and basic sanitation is a
right to everyone and one of the sustainable development goals of the UN. That it is unfortunate
that Imo under Governor Okorocha does not have a drop of water from any of the state’s
1,395 abandoned water schemes. That most disturbingly, the state has equally been overtaken
by 􀃽lth to the detriment of the health of the citizens.
31. That I shall take proactive steps to address these unacceptable but deadly sanitation and
water de􀃽cit challenges by bringing back the Imo state water corporation for immediate
reactivation of the abandoned water schemes and also bring back our 􀃾agship programme, the
Imo Clean and Green Initiative which won Owerri capital city the price of the cleanest city in
Nigeria consecutively for 3 years (2008-2010).
32. That I shall ensure that access to quality health care by all citizens irrespective of community
of residence is seamless. That all the 46 rural health care centers built, fully equipped, staffed and
operated by my administration in my 􀃽rst term but abandoned by Governor Rochas Okorocha
shall be restored. That all the 26 uncompleted hospital structures (not 27) called general
hospitals by Okorocha administration, including those illegally donated to Federal agencies
shall be converted immediately to cottage industries to create jobs for our youths while reviving the old 18 general hospitals.
33. That as the person who handed over to Okorocha, I know in full details what I handed over to
him including land bank, buildings all over the country, master plans, monies, equipment,
investments and other assets.
That all loots, including lands and government assets, shall be fully recovered and all forms of
appropriation of public property, which records I possess, would be fully addressed and
individuals found culpable would be held to account to the last kobo, without disrupting
governance.
34. That any further experiment at this point in time, with an untested hand at the Governorship
level, for whatsoever reason, may spell doom, and may lead to a total collapse of the State
economy. Then, more of our youths will jet out, to be sold and bought through the ports of Libya
and other countries. God forbid.
35. That I am 􀃽rmly convinced that Imo State will face the most profound socio- economic crisis
post–Okorocha era. Arising from absence of relevant records, absence of due process, multiple
contractual litigations, creditors legal actions, bloated debt pro􀃽le, judgment debts, illegal land
grab allegations, assets stripping, outstanding salaries and pensions as well as abandoned
substandard projects and programs.
That the complexities of what will emerge after Okorocha will require a solid cognate governance
and bi-partisan leadership experience. A “Driver mechanic” like myself who knows the ‘NUTS’
and ‘BOLTS’ of Imo State government will no doubt be a perfect 􀃽t at this critical period.
36. Lastly, that I shall keep and ful􀃽ll all the promises contained in this af􀃽davit as a covenant with the good people of Imo State.
That I swear to this Affidavit conscientiously believing the facts hereof to be true and correct in accordance with the Oaths Act, 2004