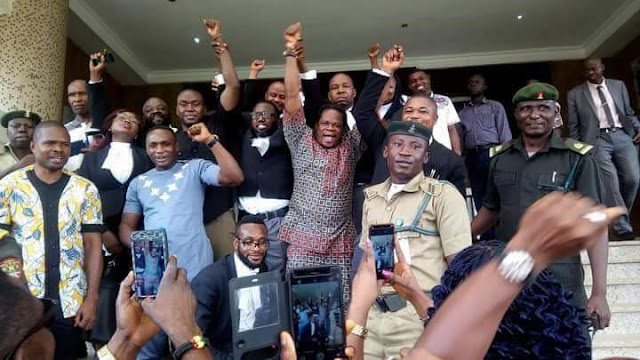 Following bail applications filed with the high Abuja federal court three, presided by Justice Binta Nyako, which has been scheduled for today (June 25, 2018), the court proceedings began at exactly at 11:30 a.m. after the arrival of Justice Binta Nyako.

The case was introduced followed by the presentation of both councils led by Barr. Ifeanyi Ejiofor and colleagues who appeared for the accused.

The judge who started on the side of Bright Chimezie, read the previous debates that included all the reports that led to Bright's arrest, the jurisdiction and how a contempt court in Uyo previously granted unconditional release.

After all, she ruled in favor of all of them with conditions associated with it, which includes that those that appear as insurance must appear with a bail of 10 million naira each. Also that the inspector general of the police must know the whereabouts of each of the accused. The conditions are also that they are not allowed to attend any demonstration or public gathering, they must not travel abroad without court orders and they must refrain from any type of press briefing.