Menu
Home » Politics » Imo Governorship: Tony Nwulu, the Sponsor of 'Not Too Young To Run Bill' May Dump PDP for UPP

Imo Governorship: Tony Nwulu, the Sponsor of 'Not Too Young To Run Bill' May Dump PDP for UPP 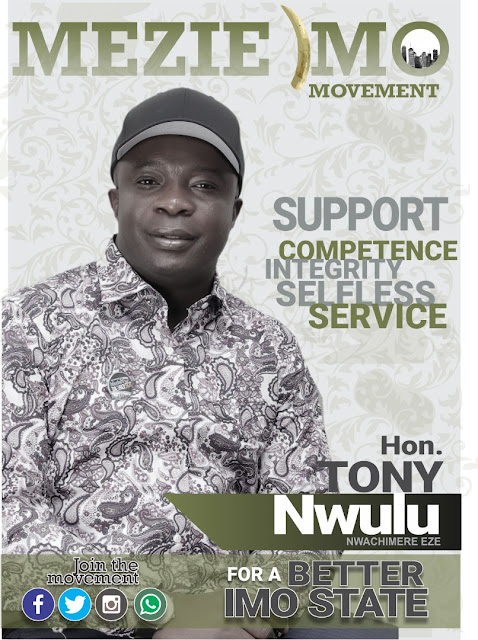 Barely a week he donated vehicles to the youth and women wing of the Peoples Democratic Party, PDP in Imo State, a frontline governorship aspirant in the State, Hon Tony Nwulu may dump the PDP.

Nwulu initiated the Not Too Young To Run bill on the floor of the House of Representatives and it was signed into law by President Muhammadu Buhari after being passed by the two chambers of the National Assembly, making him one of the huge contributors to Nigeria’s political advancement.

According to sources in his Mezie Imo Movement, a well oiled political structure driving his guber ambition, the 39 year Federal Lawmaker is said to be considering leaving the Peoples Democratic Party, PDP over reports in the social and traditional media of scandalous oath taking that is rocking the party; a dirty politics, and may dim its chances of wining the governorship election in the State in 2019.

The lawmaker who was at the State party secretariat, Owerri at the weekend to redeem his pledge to the party reacted strongly to such practice condemning in strong terms allegations of dragging party officers and delegates to a shrine for such diabolic exercise by some public office seekers in its fold. He was reported to have queried why such practice should be ongoing wondering if the State or party is returning to the dark ages.

Nwulu who has attracted both local and international commendation for the Not Too Young To Run Act which has re-energized youths across the country to get more involved in governance has been described as the “golden boy” of the party considering the enormous support his ambition has elicited from the youths within and outside Imo State since he joined the governorship race.

Just last week, some key members of the European Parliament invited him to Brussels, Belgium and expressed their willingness to invest in Imo State when he emerges Governor of the State in 2019.

Last month, his ambition got a major leap when youths in their thousands and drawn from the 27 Local Governments in Imo State urged him to declare his guber ambition.

Efforts to speak to the lawmaker on this development was futile but sources said if it is true that he is on the verge of leaving the PDP, the party would have lost an asset and a key instrument to win the Imo governorship election considering the fact that majority of Imolites are yearning for a youthful governor for the State in 2019.

Nwulu has made huge contributions to aid the strength of the PDP in Imo State and he is easily remembered for shattering the power of ethnic cleavages in the country by coming from Igboland to emerge the member representing Isolo/Oshodi Federal Constituency in the House of Representatives.

Some political analysts wonder the consequences of his exit from the PDP at a time the party is so desirous to capture power from the APC led government of Owelle Rochas Okorocha in Imo State.

The Imo State coordinator of Mezie Imo Movement, Comrade Kingsley Kelechi Chukwu could not also be reached to confirm the story which is already causing jitters in the spines of PDP chieftains and members across the State and beyond.