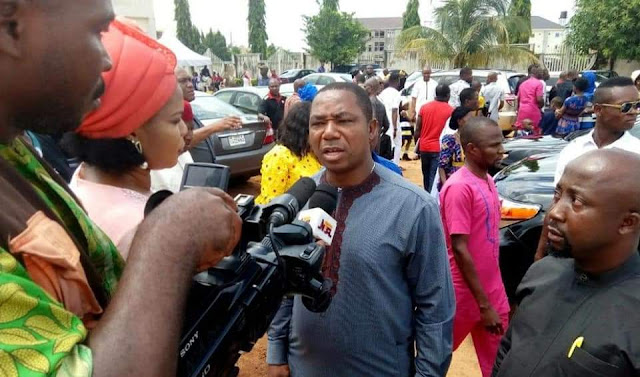 A top contender for the Imo State gubernatorial seat, Mr. Okey Ezeh, has bemoaned the collapse of the health sector in the state, saying that the incumbent administration has preoccupied itself with frivolities while human lives are lost as a result of what he described as "the insupportable healthcare system" in the state.
In a chat with newsmen in Owerri on Monday, Ezeh, who is seeking the nomination of APGA for the 2019 Imo governorship race, wondered why the incumbent administration could not build and equip even one hospital in the past seven years, regretting that such neglect has placed Imo above the national average in maternal and infant mortality rates.
The accomplished banker highlighted that the primary reason for the existence of government is to promote good life. He however lamented that the extant government in the state has become a huge nightmare and the greatest threat to the lives and property of Imo people.
The renowned investment advisor assured Imo people that the Imo Marshal Plan, which is his blueprint for the rebirth of the state, has taken cognizance of the healthcare challenges of the state by formulating a comprehensive healthcare policy. According to him,  the policy which will restore, reform and revamp the ailing healthcare system in the state will be implemented to address the rot which the outgoing government is bequeathing.
He said the policy is driven by a determination to set targets for intervention to reduce the prevalence of communicable and non-communicable diseases, and the prevalence of child and maternal morbidity and mortality, as well as to increase life expectancy through an integrated, reformed, restructured and functional healthcare system.
Ezeh added that the personnel and institutions that will assist the people by ensuring access to sound healthcare will be in place along with a functional disease control agency for surveillance and evaluation.
He enjoined Imo people to remain resolute in their determination to send bad leadership packing come next year, noting that 2019 is certainly a covenant year for the people of the state.