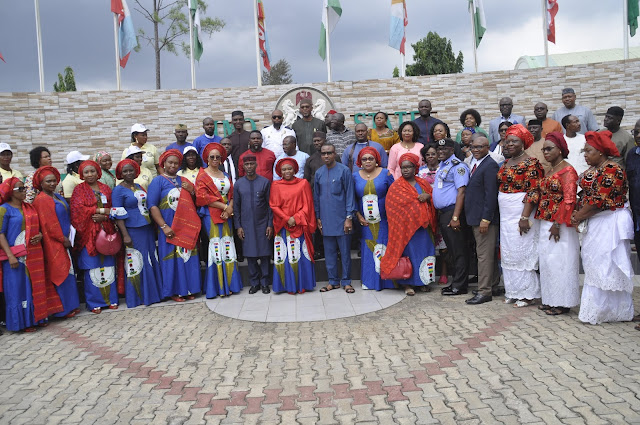 The wife of the Inspector General of Police, Princess Asmau Ndayaku Idris has taken the campaign against drug abuse to the state under the aegis of Police Officers’ Wives Association (POWA), of which she is the President, with Governor Rochas Okorocha stating that the declared war against drug abuse by the State Government is total.

Governor Okorocha spoke when Mrs. Idris came on Courtesy Call at the Government House Owerri on Tuesday, May 8, 2018, adding that the State Government holds the Nigeria Police in a very high esteem because of the sacrifices they have been making for the nation and the citizenry.

The governor who was represented by the Secretary to the Government, Sir George Eche said, “In Imo we are working with the vision of POWA in eradicating drug abuse, child trafficking and illiteracy in our state. Imo is the only state in Nigeria that is offering free education from primary to tertiary. This has helped in reducing child abuse to the barest minimum, as it is a crime for any child to be out of school in Imo State.”

He stated “In the area of drug abuse, Imo State is equally about the only state that has a senior appointee charged with the responsibly of checking the sale and consumption of illicit drugs and drug abuse. The government will surely partner with you in this regards”.

According to him “the presence of the Police Force in Imo State has expanded. I am aware that we have Nigeria Police College of administration and logistics in Ogboko, a Police Specialist Hospital and with the help of IG the second Mopol base in Imo State has been actualized. We owe him great respect”.

Mrs. Idris in her speech remarked “Powa is a non-governmental and non-profit oriented association, whose major aim and objectives are anchored on reaching out to the less-privileged ones and giving back to humanity. We focus on catering for the less privileged especially women and children by empowering them through skill acquisition especially the widows of our fallen heroes.”

She said “we are here in Imo State on a mission to campaign against drug abuse, child trafficking, abuse and molestation amongst others. And the government as an institution can’t do it alone, so we are willing and ready to collaborate with government to fight this menace in our society.”

Her words “We are calling on Imo Governor Owelle Okorocha who is a well known philanthropist and humanist to give us a voice as his voice will be a big boost to the campaign against drug abuse and illiteracy in the State”.