Menu
Home » News » WE SAW IT COMING: APC IS DEAD ON ARRIVAL IN IMO, SAYS OHAKIM

WE SAW IT COMING: APC IS DEAD ON ARRIVAL IN IMO, SAYS OHAKIM 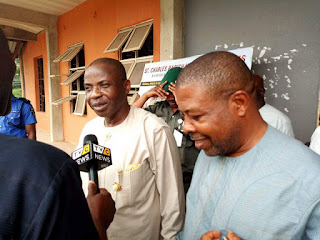 On Saturday, May 5, 2018,  Dr Ikedi Ohakim sent out 150 able bodied and intelligent Imo youths to cover the All Progressives Congress (APC) ward congress scheduled to hold across the 305 wards in the state. The report from this 150 Imo youths leaves very bad taste in the mouth as the APC practically failed in conducting ordinary ward congress.

At the risk of being accused of crying more than the bereaved, Imo people should note that the monumental failure of the APC in conducting ordinary ward congress, the first major party event of the APC in Imo State despite the array of personalities in its fold, is a clear testimony that the APC is dead on arrival in Imo.

The APC has produced various lists from its ward congress even when it did not hold. Governor Okorocha's group called "Agburu Anyi" lays hold on one while "The Allied Forces" lays hold on the order.

It is very worrisome and shameful how otherwise respectable men and women of Imo State were holding each other by the jugular in order to hold on to power. The embarrassing disappearance of the materials and personnel meant for the ward congress and the undue dragging of the security personnel in the state into the matter is an indication of a failed party and government which have been run on suspicion, division, backstabbing, greed and lack of love for the people of the state. What could be more embarrassing than the Governor running helter skelter, from police station to private homes of party leaders in frenetic search for congress materials?

What of the accusation that the Governor cornered the national officers meant to conduct the ward congress? Whereas it is not in our character to mock people who have failed or reaped their just harvest, we can only ask Governor Okorocha not to mourn any longer but to realise that what goes around comes around. We also need to tell Imo people that we saw it coming.

The embarrassing APC ward congress has further confirmed our position that the Governor is a man terribly incapable of organizing people and resources to achieve a given goal. His failure to hold the APC ward congress speaks volume of his general failure in government and highlights the kind of failure Imo people have lived with for 7 years.

We urge Governor Okorocha to purse for a minute and ponder over the following wise sayings: "Out of the eater came something to be eaten", "He who  lives by the sword will die by the sword", and "the measure with which you measured to others, it shall be measured to you also".

Imo people may recall that Okorocha became Governor in 2011 by cutting corners and doing dirty things, including the sudden disappearance of INEC Returning Officer for Ohaji/Egbema, Ngozi Nwoke, who was a staff of Alvan Ikokwu Federal College of Education. He had the over 30,000 votes from Ohaji/Egbema LGA but he was kidnapped and kept in a hotel in Anambra State. If that broad day robbery was not committed against Imo people in connivance with the gang of mercantile politicians, there would have been nothing like Governor Okorocha today. Today, both Okorocha and the gang are stewing in their own mess. Those who helped him get away with the atrocities of 2011 have ganged up against him and he is receiving the very end of his stick.

For those who are jubilating, it is not yet uhuru. These are the same people who brought Imo people to the sorry passé they found ourselves in the state, where indigent families have lost the least means of livelihood they had. Some of them had just some small houses left for them as inheritance from their fathers or grandfathers. But Governor Okorocha has destroyed them all. Those who used to have some lock-up shops in front of their houses, those who had shops in the markets or trading in the open space in the markets have all lost them. Supported by the gang, the Governor went ahead to destroy the middle class in the state by destroying thousands of offices in the state. The predicted outcome is that many of these people have died prematurely.

Yet this gang of commercial politicians cannot compel the Governor and their fellow party man to help alleviate the sufferings of the people by halting his devilish demolition of business premises and once peaceful homes of Imo people. This gang now fighting the Governor looked the other way while the local government fund was being embezzled for years.

However, it was only His Excellency Dr Ikedi Ohakim that stood with the people, taking all the bullets from the Governor, his appointees and the gang. Those who remember the letters Ohakim wrote to the Governor in 2016 and 2017 would also recall that the Governor spent more than N20M on each occasion to try to defend himself because Ohakim exposed him for what he really is: an oppressor.

The masses cannot continue to sit down and do nothing. This is the right time to retrieve Imo State from the gang of mercantile politicians and oppressors of the masses, and give power back to the man that really knows their pains and has effective plans to lift them out of the dungeon of pain, poverty, despondency.

Only one man can stop the drift into oblivion. That man is His Excellency Dr Ikedi Ohakim. Imo people should not miss this second opportunity. Those that glittered have shown they are not gold. Those that appeared as angels of light have shown that they are demons and agents of the darkness.

Dr Ikedi Ohakim loves Imo people. It takes a man that loves his people to employ 10,000 of them in one fell swoop and lifted the 15 years embargo for recruitment into the civil service. Ohakim's performance in the health sector remains unbeaten. Apart from the massive improvement in health infrastructure, Ohakim employed over 300 medical doctors and nurses and 27 medical consultants that took care of the medical needs of the people. Ohakim supplied free drugs, carried out free medical intervention programmes for certain categories of ailment, offered free medical services to mothers, pregnant women, children and the aged. This no doubt, reduced mortality rates in the state and increased the lifespan of Imo people.

Regrettably, all the legacies of the Ikedi Ohakim era in the health sector have been eroded by Governor Okorocha hugely assisted by the gang of commercial politicians. Today death rate in Imo State has been on geometric increase, with infant mortality rate peaking at 101 out of every 1000 birth while under 5 years mortality rate stood at 167 out of every 1000 birth in 2014, according to figures released by budgit, the worst in the Southeast. The number of people with HIV has also risen to 93,822, the highest also in the entire Southeast. This is not a palatable situation. Supporting Okorocha to install his son in-law, or allowing any of the ruthless gang of mercantile politicians to take over power in 2019 to continue the bastardization of the state will only worsen the situation.

Supporting Dr Ikedi Ohakim is the best thing for Imo people in 2019. That is the surest way to resolve the myriads of problems in the state, put the state back on the rail to economic growth and people's prosperity. That is what Imo needs. Imo needs Ikedi Ohakim again.