The Federal Commissioner National Communication Commission, NCC, and former Senator who represented Okigwe zone in the National Assembly, most distinguished Senator Ifeanyi Godwin Araraume was on Monday May 4th, 2018 escaped a mob action by overwhelmed and excited jubilant Imo youths working at a Supermarket in Owerri, Imo State capital.
Chief Araraume popularly called "Agu-Isiebu" due to his courage and bravery in challenging courses he believed on irrespective of odds, had took out time after the successful Local government Area Congress of the All Progressive Congress, APC which took across the 27 LGAs of Imo state to go buy himself few items at a shopping mall. 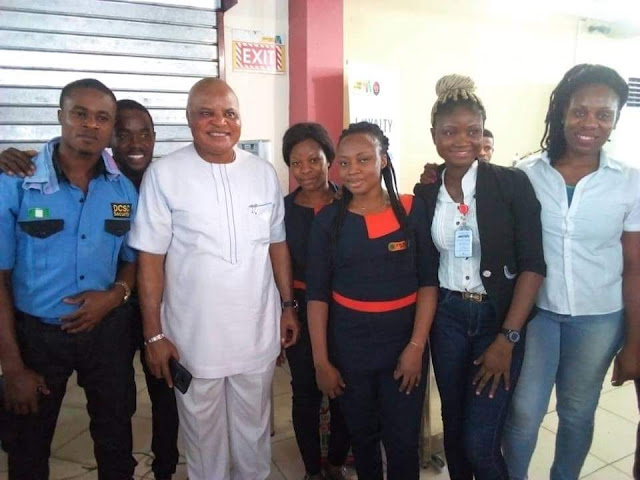 Spotted at a popular supermarket in the state capital Owerri, and after shopping, a brave staff of the mall ran to him saying "MY NEXT GOVERNOR, CAN I HAVE SOME PHOTOGRAPHS WITH YOU Sir?". The Federal Commissioner representing South East in the National Communications Commission (NCC) granted the request. Other staff of the shopping mall upon seeing how friendly and easy going the senator was, ran to him for their own photo sessions.
They sang, danced and prayed for him to succeed in his political intentions for the state, especially for standing up against family rule, bad governance and dictatorship that has taken over Governor Rochas Okorocha led rescue mission government.

A customer who was in the supermarket for shopping, stated that "Imo people have rallied round Senator Araraume for showing leadership and direction in their determination to end draconic reign and tyranny of Governor Rochas Okorocha led administration. Governor Okorocha has tormented, intimated and suppressed Imo people to a point they thought God has forsaken them. But the opportunity came during the All Progressive Congress across the country, Governor Okorocha who has plotted to install his Son-in-law, Uche Nwosu to continue to reign over the good people of Imo State, was happy seeing how Senator Araraume coordinated other APC leaders and Stakeholders to humiliate Governor Rochas Okorocha in the just concluded APC Ward and LGA Congresses, leaving the man who boasted to have retired Imo Politicians begging and leading members of his "Agburu" on a disgraceful protest along the streets of Owerri, Abuja and Daura, the president of Nigeria home town looking for who will help him, but its late"
IfeanyiCy Njoku reports from Owerri.
#IFEANYICYMEDIA #IFEANYICYBLOG #EVENTCOVERAGE #EVENTPLANNING #EVENTMANAGEMENT © IFEANYICY.COM