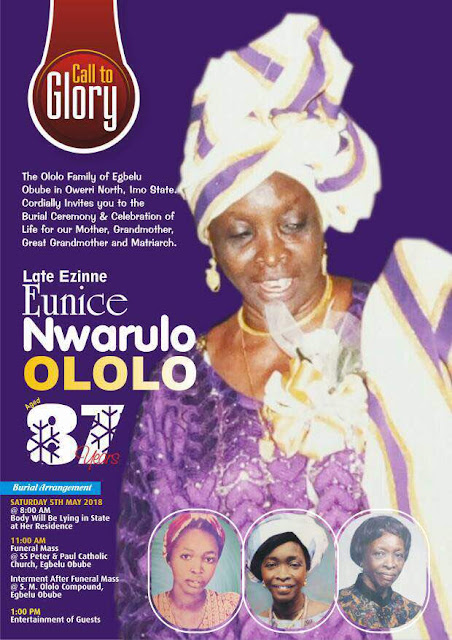 "Today she has gone to be with the Lord whom she loved so much and desired to be with at all times. She was a masterpiece, a giver and a mentor. She was a matriarch who attracted goodness, weakened strong men with her contagious smile and brandished exemplary character in everything she did. Mama you made truth and honesty your daily gospel. You stood against evil and wickedness when others gave in, you have always thought us to say something when we see something wrong.
Ezinne, you ran a good race, you contended for heaven and we pray that you are seated at the right hand of the Almighty God doing what you desire most, to worship him and be among the saints.
Ride on ma! Until we see again. You shall be greatly missed!"

She was born on December 22, 1931 to the family of Mr. Julius and Mrs. Elizabeth Oparaugo-Njoku. She was the second child of seven (7) children and preceded in death by four(4) siblings and her parents. Her father was a first generation coal miner and a native of Umuchoko Obiangwu in Ngor-Opkala L.G.A. of Imo State. Her mother was a native of Amaibo-Nguru, also in Ngor-Opkala L.G.A, and a domestic staff who worked for the Nigerian Railway expatriate personnel.

Ezinne Eunice attended Nursery School at Ogbete Enugu and proceeded to Primary School at Coal Camp. After which she proceeded to Queens College, Enugu. During her first year in school, her mother died leaving all her younger siblings to her care. Her father, not being in excellent health and her elder sister attending school of nursing at that time, Ezinne Eunice withdrew from school and started learning skilled trade of seamstress/tailoring. She became one of the few indigenous women to venture into such trade.

Ezinne Eunice excelled in her chosen trade and became one of the famous designers and skilled tailors in the area. She had a shop in front of her father's house at Plot 26 Taylor Avenue, Ogbete Enugu, a property owned by her father to this day. On Taylor Avenue, which hosted the best tailors  in then Eastern Nigeria, Ezinne specialized in Women Clothes and competed with the men who were mostly  serving the elites of in the Nigerian Railroad and Coal Mining industry.

In 1951, she got married to Mr. Sylvanus Manuocha Ololo, a railway worker from Egbelu Obube. The marriage was blessed with Eight(8) children out of ten(10) pregnancies namely, Callistus  Ifeanyi, Henrietta Ugochi, Stella, Desmond, Beatrice Uzochi, Chukwudi Celestin and Obiageri Petronilla. She was preceded in death by four(4) of the eight(8) children. After a few years of marriage her father passed away, and she became the only support for her younger ones who solely depended on her after their mother’s death some years before. She became a mother to all of them, which they still saw her until their departure.

In 1960, Ezinne Eunice and her husband relocated from Enugu to Markudi, Benue State, and returned to Enugu in 1970 where they resided until retirement. In all their movements and transfers within the during their railway days, they moved along with several men and women from Obube area who found sojourn in their home. They became a source of economic and social empowerment to many, forming family bonds and relationships with many. In 1976, they returned home after his desirable retirement and established themselves by offering community services at all levels and filling the challenging gaps.

As her husband supported the community leadership and traditional institution, Ezinne Eunice directed her full attention to the church and service to God. She became the leader of women in the church,  galvanizing women of all backgrounds into the church and created a voice for women in the area which was very much lacking. She became the pioneer president of the Catholic Women Organization (CWO) of Egbelu Obube Parish and strongly led the Sacred Heart Society.

In 1976 Ezinne Eunice felt that there was not a platform for women and youths to pray in the church and founded the St. Jude’s Society, Egbelu Obube Parish Branch. Although this was in the right sense and in service to God, it created much tension in the church because women were not supposed to play such roles at that time. Other societies in the church fought against it so much that they nicknamed the St. Jude Society ‘’Agbara nwanyi ji isi ya’’ meaning a shrine headed by women. They tension was so much that it took the intervention of the then Bishop Mark Unegbu to solve the matter. To God be the glory, the St Jude society grew and survived until this day. She became a Matron of the Legion of Marie and hosted several Seminarians who came to Egbelu Obube on Missionary work. She was also a member of the Catholic Charismatic Prayer ministry, among others.

Ezinne Eunice provided galaxy leadership to the women of the Parish and participated in Owerri Archdiocesan services. She was so attached to the women that, when she travelled overseas to the USA in 1995, the women refused to replace her until recently at old age. She ran the office perfectly well on proxy and was fully supported by her women executives. In community leadership, Ezinne Eunice was an epitome of unity and mother to many as she loved receiving and entertaining new wives in the village. Even in the village, she continued her seamstress work and trained many young ones in the skill of tailoring and weaving, including her own children. Ezinne Eunice threaded carefully where tradition disagreed or conflicted with the church, as this became a challenge in so many occasions.

Ezinne Eunice was a widow for thirty seven (37) years. After the death of her husband in 1981, she stood and provided for her children with every necessary support. As a woman of valor and substance, she was able to hide her pain of losing the husband to spare the children of much sorrow. This was fundamental in the healing recovery of the family loss.

Ezinne Eunice never entered a place without leaving it better than she found it. She had no room for gossip and could not stand injustice which always brought her at a logger-head with some people. She was known for her uprightness and non-compromise attitude. Because she was very principled and outspoken, many did not find it easy selling wicked ideas to her. She was a woman of valor who defended the less privilege and demanded service to God and humanity from those around her.

For her love of education and children, she established a nursery school at her husband's house in the village and worked with the Egbelu Primary School teachers in support of her husband's vision of Education for the Community. In this regard and after many years of trying, she worked in the background to  persuade her son, Engr. Chuks Ololo, to established a Secondary School in Egbelu Obube which resulted in the establishment of one and only Comprehensive Secondary School Egbelu-Obube. Thanks to our amiable Governor and Commander of Free Education in Imo State, His Excellency Owelle Anayo Rochas Okorocha (OON).

Today she has gone to be with the Lord whom she loved so much and desired to be with at all times. She was a masterpiece, a giver and a mentor. She was a matriarch who attracted goodness, weakened strong men with her contagious smile and brandished exemplary character in everything she did. Mama you made truth and honesty your daily gospel. You stood against evil and wickedness when others gave in, you have always thought us to say something when we see something wrong.
Ezinne, you ran a good race, you contended for heaven and we pray that you are seated at the right hand of the Almighty God doing what you desire most, to worship him and be among the saints.
Ride on ma! Until we see again. You shall be greatly missed!