In response to the brazen invasion of the Rivers State High Court Complex by armed thugs of the All Progressive Congress (APC ) backed by operatives of the Nigerian Police last Friday, the Rivers State House of Assembly has resolved to formally write the United Nations to save the people of the state  from the hands of the APC Federal Government.

The Rivers State House of Assembly also resolved to write the European Union and the Commonwealth of Nations to take immediate steps to ensure the safety of Rivers people in the face of premeditated assault by the APC Federal Government and her agents.

At an emergency  session on Monday, the Rivers State House of Assembly also resolved to write the President and Commander-in-chief with a view  to calling him to immediate action on the evils being perpetrated against Rivers people by his administration.

Speaker of the Rivers State House of Assembly, Rt Hon Ikuinyi-Owaji Ibani  who presided over the sitting placed the motion moved  by the Majority  Leader, Mr Martins Amaehwule before members for voting.

Sixteen members voted in favour of the motion, while three voted against and another three members abstained  from voting. 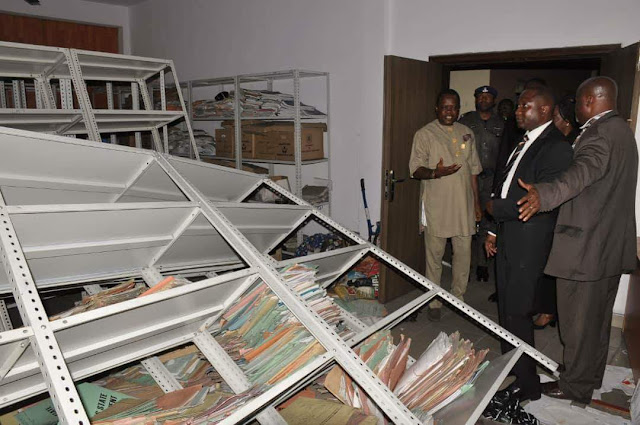 The resolution followed a motion moved by the Leader of the House and member representing Obio/Akpor State Constituency One, Martin Chike Amaewhule under matter of urgent importance condemning the attack and closure of the Rivers State High Court Complex on the 11th of May, 2018 .  The motion was seconded by the member representing Bonny State Constituency, Abiye Pepple.

Moving the Mr. Martin Amaewhule drew the attention of members of the House on the incident of 11th May, 2018 where both uniformed  and non-uniformed armed men attacked the State High Court Complex in a commando-style with sporadic gunshot, shut down the complex by locking the entrance gates, destroyed government and private property and molested judicial officers, lawyers and litigants.

The Leader of the House who stated that the cause of the crisis was an impending ruling on a matter between two disputing parties of the All Progressives Congress, APC noted with sadness that no arrest has been made even when sponsored hoodlums were seen attacking people and destroying vehicles and infrastructure at the High Court Complex in the presence of the APC-controlled Federal Anti-Robbery Squad, FSARS. He observed that the safety of the Rivers State Governor can no longer be guaranteed as the Federal Government whose responsibility it is to control the police has now delegated the power of control of the Rivers State Police Command and particularly FSARS to the leader of Rivers APC.

In his contribution, Minority Leader, Benibo Anabrabra regretted that members of his political party desecrated the temple of justice.

Deputy Speaker of the Rivers State House of Assembly, Mr Marshall Uwom said it is expedient to defend the rule of law and democracy  in the state.

Member, representing Ahoada East Constituency 2, Mr Ehie Edison while condemning  the invasion, said that acts of this nature must be met with sanctions.

Member representing Asari-Toru State Constituency Two, Emeni George who described as sacrilegious the desecration of the  State Temple of Justice urged the President to sack the Inspector General of Police for incompetence.

Majority Whip, Evans Bipi said the attack on the State High Court Complex is geared towards 2019 elections and urged the House to also write to all embassies in Nigeria.

Ruling on the matter, Speaker of the State House of Assembly, Right Honourable Ikuinyi Owaji-Ibani said the position of the house is to save the state from the illegal acts of the APC Federal Government.

He said  the attack on the judiciary which is the last hope of the common man is a sad narrative for the state and her corporate existence.

The House of Assembly later moved to the State High Court Complex where they inspected the damage done by the APC and the Nigerian Police. The Chief Judge of Rivers State conducted the State Lawmakers round.
Posted by IfeanyiCy Njoku
Labels: News.