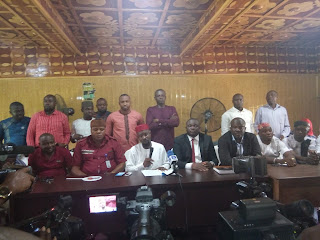 The Imo State Youth Council during their executive meeting today at the Imo youth centre signed a communique which hinged on the unwarranted insults and tantrums thrown at the Executive Governor Of Imo State, Owelle Anayo Rochas Okorocha OON.

The Youth Council listed names such as The Deputy Governor Of Imo State, His Excellency, Prince Eze Madumere, The Senator Representing Okigwe Zone in the Senate, Sen. Ben Uwajumogu, Sir Jude Ejiogu who happened to be the former SSG to the State Government, Sen Osita Izunaso, TOE Ekechi and Ichie Best Mbanaso.

The Youth Council called them ungrateful elements stressing that without the Governor, no one will know them in the present day politics in Imo State and charged them to desist in throwing tantrums and insults to the man who have single handedly given Imo State a new life.

The also said that the will no longer entertain any further unguided statement against the Governor from any quarter as nobody's interest is above the relative peace being enjoyed in the State.

Finally, the issued a 21day ultimatum to the so called APC Restoration group to apologize to the Governor or face a vote of personnel non granta by Imo Youths.

The communique was signed by the youth bodies present such as;