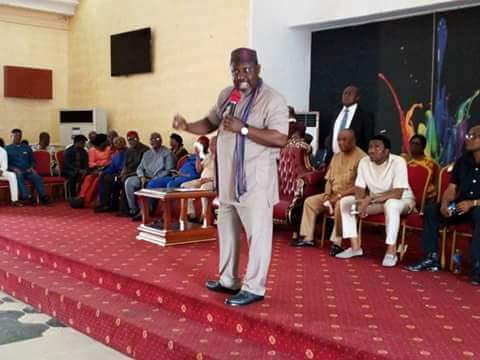 That Owelle Rochas Okorocha first mounted the governorship position of Imo State in 2011 through popular support by the people remains an obvious fact. That he made good use of such political popularism to advance the general good and welfare of the people is, perhaps, subject to disagreement.

As the candidate of All Progressives Grand Alliance (APGA) in 2011, Okorocha, whose senatorial zone, Orlu, had four years ago relinquished the gubernatorial seat, severely truncated the political understanding expected to rotate the coveted position among the three senatorial zones. Okorocha had leaned on a massive support genuinely offered by the masses to battle Imo political bigwigs, and finally bulldozed himself into Douglas House.

As a populist governor, Okorocha’s beginning was undoubtedly people-oriented. His love and sympathy for the poor and the down-trodden manifested in his early plans. Though without a well-thought-out plan, the Ideato-born philanthropist introduced free and compulsory education at all levels. He regularly paid workers monthly wage bills. His revolutionary infrastructural projects were equally commendable.

But upon securing a second term in office, Okorocha’s popularity began to nosedive. He had suddenly evolved a strange system that completely disagrees with the globally and administratively acceptable traditions in governance. The people’s governor abandoned real governance and turned to a contractor, supplier, consultant and account officer. His entire family and in-laws surreptitiously invaded the state as scramble for government contracts and supply among them visibly became a vicious trade-mark of the rescue government.

Under the shadows of Owerri Urban Renewal, the rescue mission governor has also not spared Imo markets, as he completely demolished and destroyed Eke-Ukwu Owerre, New Market, World Bank market, Orji market, Amaraku market and other markets within and outside Owerri metropolis.

The governor also unjustly visited the helpless residents of Owerri as his caterpillar roams around pulling down shops and structures along major roads and adjourning streets. The level of poverty, frustration and hopelessness enveloping Imo as at today remains unimaginable. In fact, many have hypothetically suggested that the governor derives joy in inflicting hardship, sufferings and pains on his subjects.

While the people languish in anguish, the governor, yet from his comfort zone, hatches plans to unleash a “political assault” on them. Okorocha desires to extend his dreaded and painful rescue mission era for another four years. The “rescue governor” is desperately fighting everyone on sight, as he plots to install Ugwumba Uche Nwosu, his current chief of staff and son-in-law, as the next governor of Imo State.

While some argue that the Nkwere-born chief of staff to the governor, who also marries his first daughter, enjoys the constitutional right to aspire for any elective position in the land, many others equally do. But people frown at such development for so many reasons.

First, the way and manner Okorocha snatched the governorship of Imo State under the guise of rescue mission, truncating the political zoning arrangement that first favoured his zone, Orlu, from 1999-2007, has further exposed the state to severe political turmoil.

Second, Okorocha reneged on his open promise to do only one term and hand over to someone from Owerri zone in 2015, and return to his usual presidential contest. Rather than fulfill his promise, Okorocha, again, muscled himself back to government house under the platform of All Progressives Congress (APC).

Third, Nwosu, his preferred candidate and son-in-law hails from the same Orlu zone with him, hence his emergence may be tantamount to further enslaving Owerri and Okigwe zones in the politics of Imo.

Fourth, the dictatorial style deployed by Okorocha - especially during his second term era, which has largely inflicted terrible hardship and hunger on the people - has lowered his administration as an unpopular one. There is a general belief and fear that whoever Okorocha produces in 2019 will definitely continue with his unpopular programmes and policies.

It is rather dramatic that while Imolites pray that Okorocha exhausts his remaining one year and give way for a comprehensive rehabilitation, the governor is deeply fixed with an unpopular political project targeted at foisting his relatively inexperienced son-in-law on the people.

Surprisingly, the way and manner Okorocha struggles to actualise the heinous political project appears one complex engagement that may earn him a disastrous end as a governor. Imo APC, at the moment, is already seated on the keg of gunpowder. The governor had, after hoodwinking his loyalists and followers into endorsing Nwosu, organised an exercise dangerously tagged “mock primaries” to pick his son-in-law as APC governorship candidate, ahead of the party's primary elections. Okorocha, through the controversial “mock primaries”, also awarded himself the Orlu Senatorial Zone ticket. He equally shared Okigwe and Owerri senatorial tickets to Prof Nnamdi Obiareri and Engr Emma Ojinere. Not yet done, the rescue mission governor also auctioned the 12 house of reps seats.

While Okorocha is determined to have his way, other big-wigs in APC, including two pronounced governorship aspirants, have regrouped to fight him like a common enemy. His deputy, Prince Eze Madumere, Senator Ifeanyi Ararume both governorship aspirants have strategically aligned with Senator Osita Izunaso, the national organising secretary of APC, and the senator representing Okigwe zone, Benjamin Uwajimogu to stop him and his son-in-law at the party level.

Other political parties are also assembling their arsenals waiting for Okorocha at the polls. The likes of Chief Ikedi Ohakim, who is seeking to complete his remaining tenure for Okigwe zone; the former deputy Speaker, House of Representatives, Hon Emeka Ihedioha; the senator representing Owerri senatorial zone, Attan Achonu, and some others are seeking the gubernatorial nomination of the Peoples Democratic Party (PDP) to battle it out with Okorocha's son-in-law, if he clinches the APC governorship ticket.

On the side of the resurged Imo All Progressives Grand Alliance (APGA), some notable political actors are equally preparing for a showdown with Okorocha and his son-in-law. A roll-call of APGA's governorship aspirants include Hon Ikeh Ibeh, Mr Frank Nneji, Hon Uche Onyeaguocha, Dr Sam Amadi and Mr Linus Okorie. APGA, as a political party, has equally vowed to end Okorocha's era democratically.

Can Okorocha crush the combined forces expected to be posed by Ararume, Madumere, Uwajimogu, Izunaso and Senator Hope Uzodinma to secure his son-in-law governorship ticket, as well as his senatorial ticket? Has he the capacity to also secure multiple tickets for his anointed contestants that clandestinely emerged through his controversial “mock primaries”?

Okorocha should be compelled to understand that his real opponents are Imo electorate. I mean those that share the pains of his destructions and unpopular policies and programmes. They will definitely judge him with their permanent voters’ cards (PVCs). They are constitutionally equipped to decide Okorocha's fate. The emergence of his son-in-law as governorship candidate of APC and possible election as governor of Imo State may guarantee some level of relief and protection after a controversial eight-year reign. But, if Nwosu’s project fails, Okorocha, the populist governor, may end up disastrously.