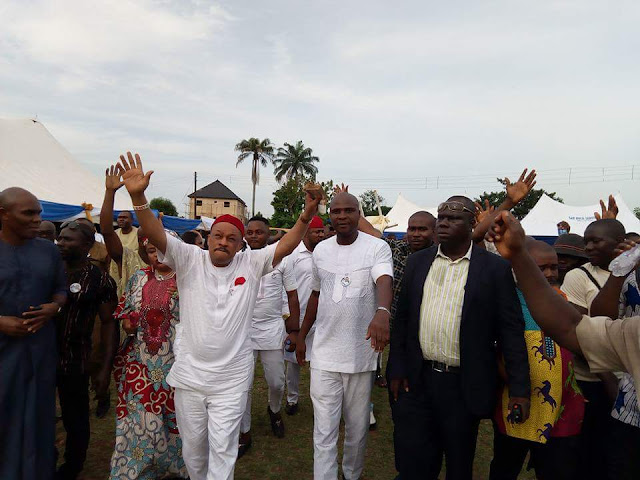 A frontline governorship aspirant in Imo State and Senator representing Imo East Senatorial District, Sen Samuel Anyanwu (Samdaddy) has stated that his party, the People's Democratic Party (PDP) boasts of men who are well qualified to govern the State.

Sen Anyanwu made the statement on Saturday during his consultative visit to leaders of  the party and statutory ward delegates from the Okigwe senatorial zone of the State, in line with his governorship ambition.

The former local government Chairman maintained that the party in the State was blessed with credible leaders and elites capable of leading the eastern heartland to greater heights.

The lawmaker insisted that delivering the State from the clutches of the ruling APC is a task PDP must accomplish in 2019.

However, he noted that to achieve this, the party must field a candidate that is popular and capable of winning the general election.

The two time House of Assembly member said that he has the qualities, ahead of others, to win the support of majority of Imo people  and return PDP back to the summit of leadership in the State.

The ranking Senator who lamented that the present administration of governor Rochas Okorocha has taken Imo State backwards, developmentally and otherwise, posited that the glory of God has departed from his administration.

"Let me tell you, God is angry with them.  The glory has departed, that is why they are making a lot mistakes", he averred.

The Chairman, House Committee on Ethics, Privileges and Public Petitions, reitrated that his governorship aspiration is divine and motivated by a burning desire to place Imo State back to the pride of place, as it were in the time of late Samuel Mbakwe.
Posted by IfeanyiCy Njoku
Labels: Politics