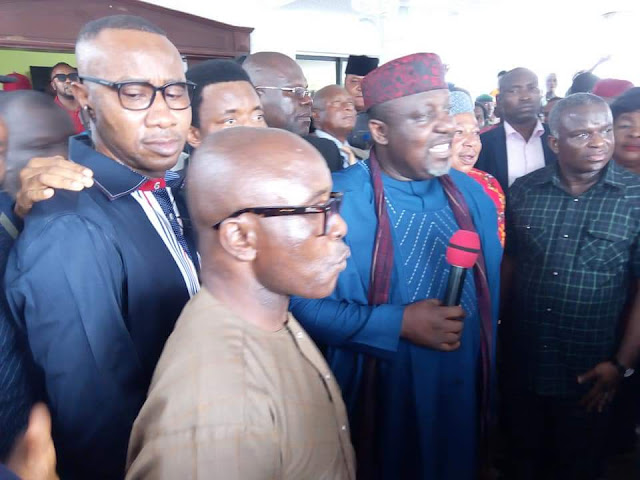 Imo State Governor, Rochas Okorocha has slammed Senator Chris Anyanwu for his wasted eight years in the Senate of the Federal Republic of Nigeria when he represented the people of Owerri Senatorial District.

Governor Okorocha speaking through his Chief Press Secretary, Sam Onwuemeodo in press statement titled "SENATOR CHRIS ANYANWU WASTED 8 YEARS IN THE SENATE IN HER BRAZEN BRAVADO -IN IMO, THE ELITE & godfathers DISPLACED BY ROCHAS SINCE 2011 ARE FIGHTING TO STAGE A COME-BACK IN 2019", took the proprietor of HOT FM Radio to the cleaners when he said:


"Senator Chris Anyanwu wasted eight years in the Senate and has no moral Justification to run down Governor Rochas Okorocha, whose achievements in less than eight years have surpassed the achievements of all those who had governed the State before him put together."

" Senator Anyanwu had taken up Governor Okorocha in the media, talking about how Imo people are set to take back their State from the governor. And one may be forced to ask Senator Anyanwu, which State and which Imo people?

The only thing she did for the eight years, was to build a radio station for herself which is called Hot FM in Owerri, with the staff not being paid salaries for years. Also, the only major appointment she got was in the Revenue Mobilization Allocation and Fiscal Commission (RMAFC) and she gave it to her husband, Dr. Casmir Anyanwu."

" The truth is that there is a class war going on in the State at the moment. And the crux of the matter is 2019. The elite and godfathers who felt displaced by Governor Rochas Okorocha since 2011 are fighting to stage a come-back, targeting 2019. These elements should stop deceiving the public with their pretences.

Again, the first question you ask about a government is the extent that government has served the people who own the mandate abinitio. They have been honest to themselves not to accuse Rochas of non-performance. On our own, we have claimed that Okorocha has more than one thousand verifiable projects to his credit and has achieved more than all those before him. And nobody has said it is not true.

If Rochas has more than one thousand projects and has achieved more than those before him put together, what is then the issue? The issue is that the elite and the godfathers have run dry since Rochas came and they want to come and recover all they have lost since 2011.

And Rochas Okorocha never endorsed Uche Nwosu for the fun of it. He only wants to ensure that someone who would continue to work for Imo people and continue to keep these elite and godfathers in check, takes over from him. Don’t forget that when the PDP was in power, the usual story was that there was no money.

But today, aside the functional free education, Imo people have seen total transformation of the State at all levels. And they are there for people to see. And for those who do not know, Imo people will never never allow these elite and godfathers to come and hold them to ransom again.

Therefore in 2019, Owelle will talk to Imo people and tell them the route to follow. And you wonder what these folks will tell Imo people. Once Imo people hear that these people are coming to start their Share-The-Money slogan again, at the expense of free education and so on, they are finished."