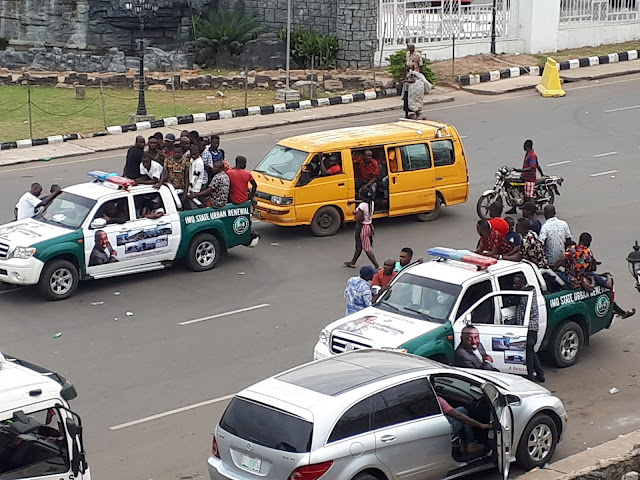 The Peoples Democratic Party (PDP), Imo State, has noted with dismay, the shameful conduct of the ward congresses of the All Progressives Congress (APC) particularly in Imo State.

To be modest, the PDP unequivocally posits that the APC Ward Congress held last weekend was a show of shame and a pointer that Nigeria’s democracy is under serious threat and may be truncated unless the APC is roundly rejected by Nigerians in the 2019 general election.

In Imo State, a mere Ward Congress turned into a circus show among the deluge of shenanigans and electoral kleptomaniacs in the APC. Imo people watched in utter disbelief the open manipulation and counter-manipulation of the people’s will between Governor Rochas Okorocha and other APC stalwarts otherwise known as “Allied Forces” against the governor.

Governor Okorocha for the first time was full of wailing and lamentations, having been out-rigged in the process by a more determined coalition of riggers who make up the Allied Forces.

Shamelessly, his media aide, Sam Onwumemedo metamorphosed into an unofficial Publicity Secretary of the APC in a bid to hurriedly discredit the rigging power of the Allied Forces. In other words, the APC literarily turned the peaceful Imo society into an absurdist theatre with Governor Okorocha openly crying wolf and demanding the cancellation of the Ward Congress in Imo State. What a shame!

To the PDP, the disgraceful actions of Governor Okorocha and the Allied Forces in the APC confirms our long held position that the APC is a party of law breakers, a fusion of strange bed fellows and a repository of gangsters. Neither Okorocha nor the APC Allied Forces in Imo State is worthy to seek the people’s mandate. It was these gangsters (Okorocha inclusive) that had perennially caused trouble for the PDP in the past years and always sold out the party at critical moments. Thank God that today, the baton has shifted to APC and never to return to PDP. It is the Lord’s doing.

The outcome of the Ward Congress further confirmed that Governor Okorocha is a paper weight politician who had nothing to back up his garrulous nature.

Prior to the discredited APC Ward Congress, he had loquaciously boosted of being the Alpha and Omega in the APC of Imo State but events of last weekend had punctured such empty assertions by the embattled governor.

While the PDP do not wish to dabble into the circumstances which heralded the shameful Ward Congress of the APC, Imo State, it is however, instructive to alert Imo people of the dangers of entrusting their mandate with the APC again or with anything associated with it. It is now obvious that the APC cannot be trusted. A vote for APC in 2019 translates into encouraging unending pains, starvation, hunger, suppression and intimidation of the people.

It takes two to compare. The difference apparently is now clear and that is the incontestable fact that the PDP remains the only true democratic and people-oriented party in Nigeria. On the contrary, the APC is a wicked and rudderless contraption hurriedly packaged to deceive people with false promises which till date, they have not been able to fulfil. Imo people are witnesses to these facts.

However, the PDP, Imo State, appeals to the good people of Imo State to approach the future with renewed vigour and mind-set to throw away the APC into the garbage bin where it rightfully belongs. Allowing another set of gangsters to succeed the present gangster in the State will undoubtedly spell doom for Imo and her people. Once beaten, twice shy.

The PDP, therefore, joins well meaning Imo people to condemn strongly, the disruption of peace and serenity of Imo State last weekend by Governor Okorocha’s thugs and the gangsters in APC’s Allied Forces, over an insignificant party Ward Congress of the party which does not in any way enhance the socio-economic well being of the people. Imo belongs to everybody and nobody has the right to infringe on another’s right to peaceful existence.