2019 Guber; The New Face of Araraumephobia 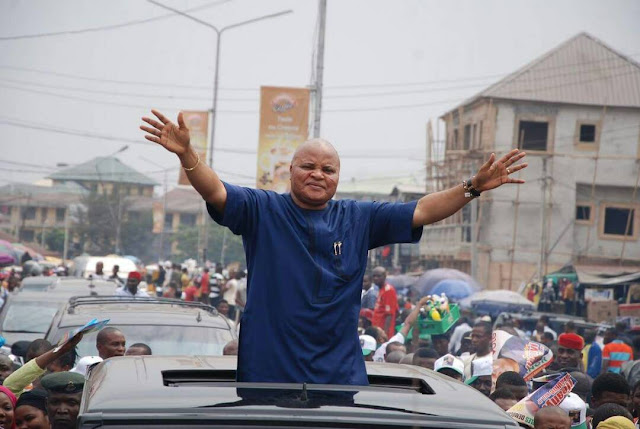 Expectedly, the activities preceding the next  general elections in the country is indeed coming with the inevitable trappings.

In Imo state, fondly called the Eastern Heartland, the race for who becomes the governor undoubtedly will be interesting if the potpourri of political intrigues and schemings going on behind the scene are anything to go by.

The battle for the possession of Government House, Owerri, otherwise known as Douglas House, before the incumbent renamed it "People's House" will  be more fascinating as it would usher in a new era of leadership at the Governor's Office, considering that incumbent, Rochas Anayo Ethelbert Okorocha has not only started warming up for exit  but also learning the steps to quit from office after a two-term experience.

Okorocha was elected in 2011 and had a repeat chance in 2015 to technically knock himself out for future contest in 2019 governorship.

Another veritable factor to make Imo one of the states to watch in the next election, is the rumoured desire of the governor, to back one of his own, Uche Nwosu as a successor, through the alleged employment of a rather awkward political processes of "Endorsements and Mock Primaries"

The unorthodox political process no doubt has raised dust in the rank and file of the party thereby raising fears that it has  the capacity to rock ruling party in the state.

Beyond the facade of the alleged  underhand practice to foist Nwosu who is the Chief of Staff to the governor and also son in law to the governor Okorocha, is the timely  appearance of Ifeanyi Godwin Araraume. Araraume, a two-time Senator represented Okigwe Zone at the National Assembly is among the few who are expected to throw in their hats into the ring for the APC governorship ticket when the sale for the ticket is opened . On paper today, only few politicians of APC stock, will brace the odds to seek the mandate of the party delegates to become the flag bearer. 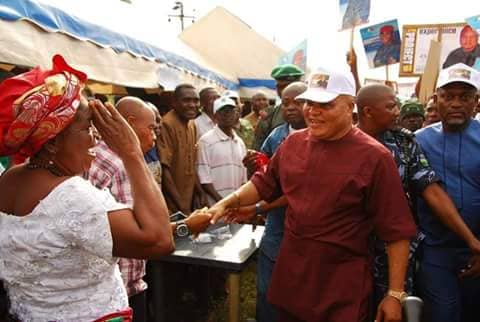 Araraume, needs no introduction to watchers and partakers in the state except for neophytes in the scene if his antecedents and are considered in the political hemisphere. Speculations are rife that Araraume's desire to become the next governor of the state has sent shivers down the spines in some quarters who have started developing a little measure of psychosis over the Senator's ambition.

The distorted view of reality about  choosing candidates for elective positions reigning in Imo APC ahead 2019 election, especially for the office of the governor, cannot be divorced from the new fear of Araraume, reigning in the minds of a section of APC members controlled by the incumbent, Rochas Okorocha. Indications that the interest of the Isiala Mbano born Araraume has become a thorn in the flesh of Okorocha and his Rescue Mission Government followers emerged when the governor eschewed democratic ethos to reel out cut off conditions for his would be successor. 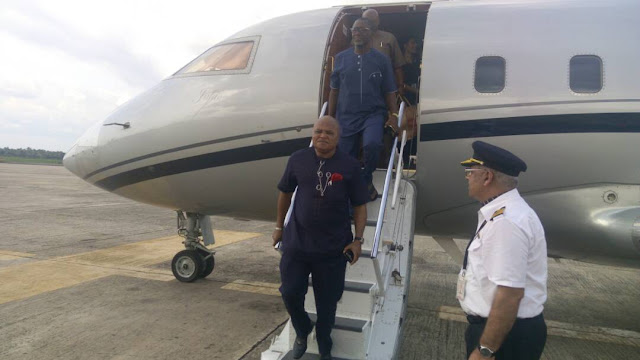 Apparently aware that the Senator has marked his golden age some years ago, he  put a the age bracket of his would be successor. According to him, only Under 50 years of age are eligible to earn his blessing even as he engaged in repeated utterances disclosing to those who cared to listen that the likes of Araraume and his immediate predecessor, Ikedi Ohakim won't rule Imo again.

The despicable submission of the governor that Araraume won't be his successor, regularly preached to his disciples and often used as  a topic during official functions of the state government, can be said to be part of the vile attempt to project the rumoured ambition of his son in law. The issue of Nwosu picking APC ticket and succeeding his father in law and the wife taking the position of First Lady of the state after the tenure of the mother in law, in the coming dispensation is attracting the wrath of the public.

A former ally of Okorocha who bolted out of the governor's Rescue Mission team and returned to APGA, Uche Onyeagocha principally fingered the governorship bid of Nwosu as the main reasons for calling it quits with the adminstration. The former lawmaker who represented Owerri Federal Constituency in the House of Reps while accusing Okorocha of attempting to prosecute a "Third Term" agenda further alleged that the governor as part of the project to market his son in law, subtly crowned him the undisputed "Dispenser of State Favour"

The major threat to Okorocha's plot of  trying to foist Nwosu on Imolites, is Araraume, hence the new wave of Araraume phobia ravaging the governor's camp.  And how did it start?  During the heat period of the 2015 election,  the incumbent was in a precarious situation arising from pernicious tackles hammered at him  from the ruling PDP who was at the centre of government in Abuja and a groundswell of organised tactics orchestrated by the local opposition groups to hinder his second term chances, Araraume came to Okorocha's rescue. Record keepers have it that  having lost the PDP primaries in an uncomfortable process, Okorocha came calling even with the wife to seek the support of the Senator to salvage the situation. The new partnership was cemented a week to the governorship election as the governor moved his campaign structure to the Onitsha road campaign office of the Destiny Organisation; the campaign structure of the fair skinned Senator to him and his group.

While the Senator's exit from his former party, the Peoples Democratic Party, PDP,  caused a devastating blow to the fortunes of the governorship candidate, Okorocha became the eventual gainer. It was not surprising that what was on the lips of APC faithful and the governor's second term crusaders was the branding of Araraume as the "Game Changer" of the party. The governor in appreciation of the rare qualities showcased by Araraume  and the tactical finesse he injected into the system alongside members of his campaign group guaranteed appointment to members of his groups including one of his sons who was made a commissioner. 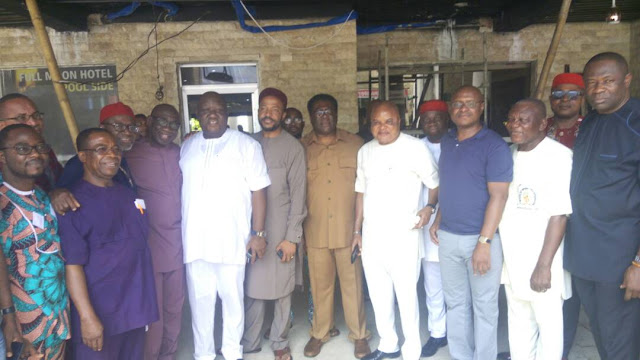 But midway into this romance, the tide changed as Okorocha started suffering suspected Araraume phobia if the symptoms are properly diagnosed in any mental laboratory. Apart from verbal disapprovals to the Senator becoming his successor, the on going "Endorsement"  jamboree his son in law is rapidly enjoying across all councils in the state as well as the planned "Mock Primaries" being touted as the process to select candidates for elective positions of the APC are by-products of the Araraume phobia making a mince meat of the governor's camp.

Apparently, disturbed by the cult figure of the Senator, buoyed by a well organised campaign structure and attractive dispositions to earn immense love and followership from Imo citizens, the governor is reported to be tinkering on usage of underhand practices such as induced "Endorsement" and "Mock Primaries" to undermine the interest of the Senator and clear the coast for his favourite. It was even predicted that part of the grand design to wage "shadow boxing" war against Araraume was to adopt the  racist inclination of "Agburu Anyi" politics, for his followers to discriminate against the Senator. The divisive slogan is also borne out of the  fear of Araraume who is enjoying considerable support from the rank and file of the APC in Imo.

Already, the Araraume phobia mesmerizing Okorocha's Rescue Missionaries have forced them to institute schisms in the party. After majority of the LGA party chairmen who have been suffering untold abandonment and rejection from the state government had an interface with the Senator who is a leader of the party, the media machines of the state government accompanied by their rusty e-goons went frenzy with cheap blackmails and campaign of calumny against Araraume.

Fictitious tales of unimaginable proportion laced with uninformed verbiage was let out only to demean the status of the Senator. Having observed that their puerile efforts to tarnish his hard  won image  couldn't fly, a new model of anti-Araraume propensity debuted. Illegal methods and anti party dispositions were secured to engage in either unlawful removal or suspensions of the council chairmen accused to be loyal to Araraume. From Ohaji/Egbema to Oguta LGA and pockets of areas, the story remains the same. The simple reason for the witch hunt against the so called G-16, the group of 16 out of the 27 council LGA chairmen is showing solidarity with Araraume who came to their rescue after Okorocha allegedly jettisoned them and did not consider their interest in preference to his SDC and CGC structures, in the course of discharging his duties at the local levels.

What of the ill attitude meted to the  former appointees of the governor and APC chieftains suspected  to be romancing Araraume. Apart from summary dismissals from their positions,  their officials cars were forcefully taken away from them in bizarre manners reminiscent of the military era when rule of law took back seat. Any attempt by any APC official or government appointee  showing affinity to the Senator results is ostracized and treated like an outcast. 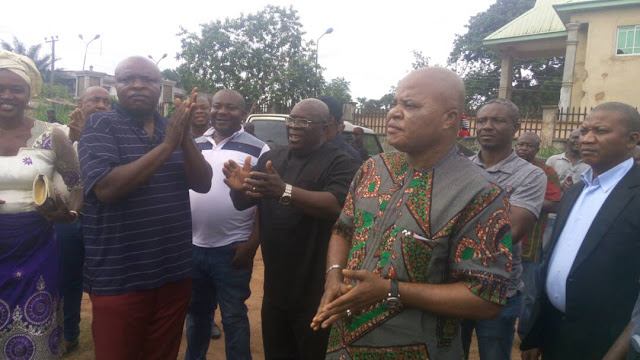 A statement made available to the press last weekend by a group of disturbed APC members in Imo state, the Imo APC Stakeholders Forum,  confirmed the trifling from the state government since Araraume assumed a prominent place in the party. The Stakeholders not only condemned the frivolous behavior but also went further to report to the President, Muhammad Buhari by warning that it has the capacity to polarise the party and deny it victory in all strata come 2019.

Otherwise known as Agu Isiebu, Araraume is a known to be a dogged fighter who doesn't surrender easily. Determined to bring in the talisman that has seen him become a successful entrepreneur and business man in a bid  to transform the State, the experience garnered at the Senate and associated sagacity in the field of politics is a rich pedigree that petrify Okorocha and his followers.

After a record two terms, year 2007 saw Araraume showcase superlative performance to pick PDP governorship ticket. Though he was denied to carry the party's flag, but his dexterity propelled him to regain it via Supreme Court decision. Against all odds, the Senator was at the verge of grabbing the PDP ticket in 2015 but for the controversial circumstances that led to a court matter before he dumped the party for APC.

The months to come will surely determine if the shenanigans trailing the Araraume phobia will work out and Imo or not as the shape of what will play out in 2019 begins to get shape.

Kelechi Mejuobi is a co-publisher of Trumpeta newspapers, regular columnist at the back page "agwodinunu and a socio- political commentator
Posted by IfeanyiCy Njoku
Labels: Politics