Why Jonathan Should Be Docked - Oshiomhole Fire Hot Shots 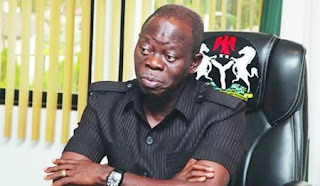 While speaking to newsmen in Benin City at the weekend shortly after attending the wedding ceremony, former Governor of Edo State, Comrade Adams Oshiomhole, said that ex-President Goodluck Jonathan should be docked if the Peoples Democratic Party (PDP) insists that prosecution of suspected looters is selective.

According to The Nation, Oshiomhole said Jonathan should be docked for approving money beyond his powers and spending same in a way that was not accounted for.

The influential politician also faulted the calls by the PDP that the National Assembly should approve the $1bn the federal government wants to spend on security, saying the PDP spent well above that sum without going to the national assembly.

On the condemnation that trailed the release of looters’ list, Comrade Oshiomhole said names of looters should be made public as it was the right of Nigerians to know the level of rot that transpired.

He urged President Muhammadu Buhari to be ruthless in going against those alleged to have looted the nation’s resources, and alleged that hired writers were made to challenge him when he first raised alarm over the money that was looted from the treasury.

He said; “I hear them say prosecution is selective. Maybe they are right because if they are not, maybe President Jonathan should be on the dock. He approved money beyond his powers and spent it in a way that is not accounted for.

“I think that if other Nigerians don’t understand the power of transparency, the right to know, the media should uphold that right and defend it. What was stolen was not from private purse; the house that was destroyed was not a private residence. We are talking of resources which if it is distributed on basis of equality divide by 180 million people you will be a lot richer.

“I think my only complain is that the federal government should go more ruthless because they are a lot of people who should be in court who are not there because when I was still in the office and I said the kind of money they stole was huge in dollars, they paid hired writers to say how do I know.

“I know that we cannot be lamenting today without understanding that the treasury was burgled yesterday. It is like someone sneaked into your kitchen and took everything out and you woke up he tells you am sorry I stole the pot of soup, in fact, I broke the pot. Should we continue like that?

“I think the promise of democracy is that good or bad the people have the right to know and that is the starting point and particularly important when that armed robber of yesterday is trying to do face surgery so that he looks different.

"Some are jumping the boat to wear new face, to change identity, and to change their finger print so that they can come back. I think the people have the right to know and If any of them think that what has being said is not true, they can go to Court”

“All of them who are involved and those who they are looking for they should put everything in public domain and that is the promise of democracy and it is about you.

Just by virtue of being in a winning party, they helped themselves so much. One of the acting chairmen of PDP, Makarfi, I used to respect him so much, I heard him saying that the reason they did not indict Diezani was that the money missing and everything that was done Goodluck approved.

“If President approved that money, should it be stolen and not go into the federation account. Is that the reason the PDP led senate and a sub –committee led by Markarfi cannot say it is not the minister but President Jonathan?.