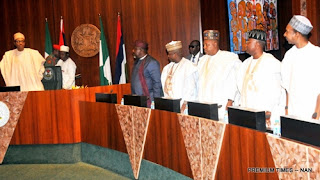 President Muhammadu Buhari and some Governors of the ruling All Progressives Congress (APC) are meeting again today for the second day in a row at the presidential villa, Abuja.

They are meeting over the crisis rocking the ruling party as well as the fate of the John Odigie-Oyegun-led National Working Committee party.

In a new report by DailyTrust, the APC governors during the high-profile meeting dumped the party's national chairman, John Oyegun, and bowed to President Buhari over his stance to halt the tenure elongation of Oyegun and his NWC.

Here's how the publication reported the story;

"All the 24 governors of the All Progressives Congress have agreed with President Muhammadu Buhari that the party's constitution should be respected in electing a new National Working Committee of the party.

President Buhari had at the party's National Executive Committee's meeting last week declared as illegal, a proposal for the extension of the tenure of the John Odigie-Oyegun-led NWC of the party.

"So, therefore, we collectively agreed that we will have congresses at all levels - local, state and national."
Posted by Unknown
Labels: News, Politics