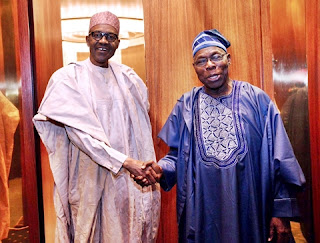 The Presidency on Monday said President Muhammadu Buhari would not take issue with former President Olusegun Obasanjo over his comment.

The Special Adviser to the President on Media and Publicity, Mr. Femi Adesina, said this in an interview monitored on Channels Television.

Adesina said Buhari would not engage Obasanjo who was his senior in the military.

The presidential spokesman, however, said since Obasanjo did not say anything different from what was contained in a letter he released on the administration recently, the response provided by the Federal Government then was still relevant.

He said, “President Muhammadu Buhari will not take issue with former President Olusegun Obasanjo. One, President Obasanjo was his superior in the military.

“Two, what President Obasanjo has just said is not different from what he said in his letter of January 23; and adequate response was given to that letter by the Minister of Information, Alhaji Lai Mohammed.

“So, the response the minister gave to that letter suffices to whatever President Obasanjo has just said.”

When contacted on the telephone, the Senior Special Assistant to the President on Media and Publicity, Garba Shehu, also said he would not make a comment on the matter.
Posted by Unknown
Labels: News, Politics