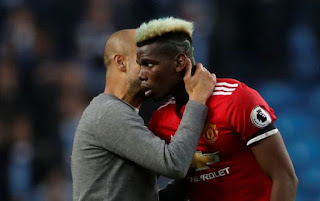 And after the Catalan’s sensational pre-derby revelations, it was no surprise that television cameras homed in on the moment the two men came face to face.

Guardiola claimed Pogba had been offered to City in January - prompting further scrutiny of the £89m midfielder’s relationship with Jose Mourinho.

City’s manager also claimed the French international was too expensive to entertain the prospect of a transfer.
As Mourinho quipped afterwards, “His price has gone up.”

Guardiola was seen having an extended conversation with Pogba in the middle of the pitch - but insisted there was no discussion of his pre-match comments.
“I went to congratulate him on the result,” he said - offering no more insight into the exchange.

For Pogba, two goals and a chance to silence City fans and his critics provided sweet satisfaction in what has been a turbulent season.

“I didn’t want to lose against City, the loss from last season is still in my mind,” he told Sky Sports. “If they won they are champions, for all the fans it would be like death.

“To lose against City and to see them celebrate, I couldn’t let that happen. At half time in the dressing room we said we have nothing to lose, 2-0 lets make it.

“After a second half like this, we have to do that all the time. If we did we would be up there with City, and maybe even in front.”

Guardiola is now faced with the task of picking up his players ahead of Tuesday’s crucial Champions League quarter final second leg against Liverpool as City look to overturn a 3-0 deficit.

He said: “Of course we are sad for ourselves for our fans, but we have still 13 points and goal difference.

“We have to win two more games and after the game on Tuesday we are going to focus on the Premier league to try as quick as possible to get it.

“OF course we wanted to win today. I am not going to deny that, but we know exactly which team we played.

“They are second in the league, but I am here to analyse the game. Not the feelings.

“I am sorry for the fans, but I think they cannot have complaints about what we have done.

“For the fans it is tough and maybe we are going to get more credit if we are able to win the Premier League and people will say how tough it is to win.

“In November, December everybody said the Premier League is done. But it was a tough, tough fight to keep going every weekend to be focused.”
Posted by Unknown
Labels: News, Sports