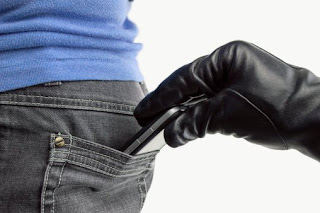 Phone snatchers, on Tuesday chopped off the hand of a young woman and took away her hand bag, phone and cash in Cross River.

The suspects also robbed shops and houses in neighbouring streets in Calabar South local government area of the state.

An eyewitness, who gave his name as Gabriel Udo, said four armed men ambushed some residents along Ambo Street in Calabar South.

The suspects robbed the people of their belongings, including phones, cash and other valuables.

One of the victims, a woman allegedly struggled with the suspects over her phone but she had her hand chopped off.

Udo said one of the armed robbers used a machete to hack the woman’s hand, and beat her mercilessly.

“The incident happened at about 8pm. We saw when one of them drew out his cutlass and severed the woman’s left hand, which made her to become weak.

“She merely wanted to wriggle herself away from the bad boys who were stabbing innocent people and collecting their phones and money,” he said.

He said when the robbers abandoned the woman, people came out took her to a hospital.

As the gang moved down the Ambo Street, they were shooting sporadically.

Commissioner of police in the State, Hafiz Inuwa Mohammed said they had decided to pay special attention to the Calabar South, which had reportedl become infamous for assorted crimes.

“Last month, across the state, we arrested 85 cultists, armed robbers and kidnappers who will soon face trial. We have a special team deployed to the notorious Calabar South.

“I assure that we will return confidence to the people living there”, he said.
Posted by Unknown
Labels: Crime, News