Oluwo of Iwoland, Oba Akanbi, Is A Gutless And Treacherous Bastard - Former Minister 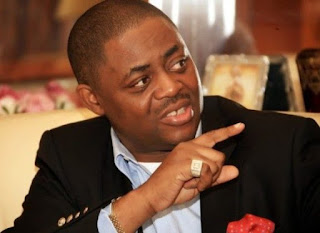 Former Minister of Aviation, Femi Fani-Kayode has blasted the hell out of the Oluwo of Iwoland, Oba Abdulrasheed Akanbi for allegedly taking up the title of 'Emir of Iwo'.

Recall that Oba Abdulrasheed Akanbi, the Oluwo of Iwo, recently declared himself the first and only ‘Emir of Yorubaland’, adding that the reason for his decision was that traditional rulers or ‘Obas’ in the south-west were always fighting with each other.

Irked by the development, FFK took to Twitter and wrote: “This is Oba Abdulrasheed Akanbi, the Oluwo of Iwo who now insists that he must be called the Emir of Yorubaland.”

“He is a gutless and treacherous bastard who is an Islamofascist and who has sold his people to the Fulani raiders.”

“May God curse the day that he was born.” 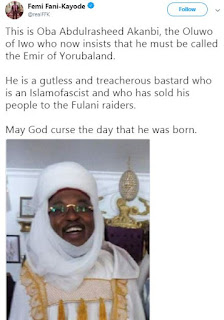