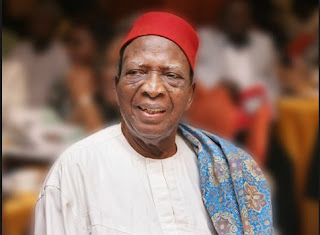 While speaking yesterday when members of IPOB, led by the African Representative, Gorge Onyibe, visited him at his country home, Atani, in Anambra State, former National Secretary of Ohanaeze Ndigbo, Prof Ben Nwabueze, said he will no longer participate in any peace talk unless the Federal Government delists the IPOB as a terrorist group as well as de-proscribe it.

According to Daily Sun, the elder statesman wondered why the federal government tagged IPOB a terrorist group and proscribed its activities for just agitating for Biafra restoration, while groups like Boko Haram and Fulani herdsmen,
“who have been slaughtering people” , are moving around freely.

Prof Nwabueze said: “IPOB cannot be asked to negotiate for peace when they remain proscribed. I don’t think the federal government wants peace because if they want peace, the first thing to do is to de-proscribed IPOB.

“I will not be part of any peace talk with anybody until IPOB is de-proscribed and until the declaration of IPOB as a terrorist group is removed.

“If they have the courage to do these, okay, we can talk peace. I will not participate in any kind of peace talk so long as IPOB remains proscribed or tagged a terrorist organisation.

“There are groups and associations that have done more terrible things in this country; IPOB is only agitating for Biafra and they have not done anything more than agitation, they have killed nobody, but in contrary, they are the ones being killed.

“If we talk of the people that have massacred and slaughtered people, it is the Boko Haram insurgents and Fulani herdsmen, which should be declared terrorist groups and proscribed.

“The federal government used double standard in the proscription of IPOB; what standard did they use to proscribe IPOB?

“The people who gave quit notice to Ndigbo to leave the North in 90 days by October 1, last year, you have not proscribed them.

“This is what has destroyed Nigeria over night. Arewa Youths organised hate speeches intended to bring about ethnic cleansing, yet, they are still moving about.

Nobody proscribed them, nobody declared them a terrorist group.

“But, IPOB group doing nothing, but agitation for Biafra, was declared terrorrist group. And those who have slaughtered and killed innocent citizens, the Fulani herdsmen, are moving about freely with AK47, still killing people.

“They turned around to castigate Gen. T.Y Danjiuma for calling on Nigerians to defend themselves, can you imagine that. In the constitution, Section 33 guarantees the right of self defence. Somebody is attacking you with AK47 and you use stick in defence. I can’t image such idiotic thing like that.”
Posted by Unknown
Labels: News, Politics